U.K. rockers The Treatment have released a second video in support of their critically acclaimed new album Generation Me. After releasing a video for the song “Let It Begin”, it is now time for “Backseat Heartbeat” to get the video treatment. 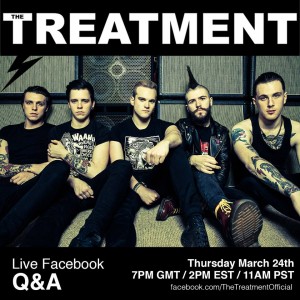 Sleaze Roxx stated the following in its recent review of The Treatment‘s latest album: “Generation Me is an absolutely phenomenal record. There’s not one bad track on it and there are some truly standout tracks. Unlike certain records that I play where nothing stands out, the opposite occurs with Generation Me as there are many songs for which I stand up and take notice each time they play. Standout tracks include the straightforward opener “Let It Begin”, the slower and melodic “Backseat Heartbeat”, the peppy “Cry Tough” and the attitude filled “Bloodsucker” (although the latter’s chorus is a bit on the weak side). Truth be told, just about every track on Generation Me is worthy of taking notice.”