UK rockers The Treatment will be releasing a deluxe version of their new studio album Generation Me via Frontiers Music Srl on November 18, 2016. 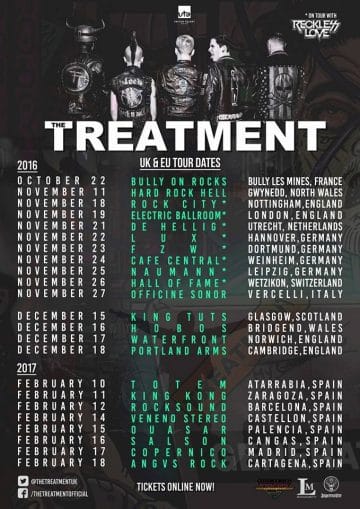 “…Frontiers Music Srl is pleased to announce the digital release of a Deluxe Edition of The Treatment’s hit album Generation Me on November 18!

The deluxe edition adds four bonus tracks: one new studio track, “Killer”, and stripped down acoustic performances of: “Let It Begin” (Acoustic), “Running With the Dogs” (Acoustic) and “We Are Beautiful” (Acoustic). Get it here now: http://radi.al/GenerationMeDeluxe“

Frontiers Music Srl‘s press release also includes various quotes from reviews of The Treatment‘s new album Generation Me including one from Sleaze Roxx: “[Given how Generation Me has really grown on me after a few listens, there is no need to say that I have now purchased The Treatment‘s two previous albums. I am always on the lookout for the year’s next great album and] there seems little to no doubt in my mind that The Treatment‘s Generation Me will find itself nestled among the Sleaze Roxx’s Top Ten Albums of 2016 at the end of this year.

The Treatment are about to embark on a tour of Europe, which will see the UK rockers play 14 shows between November 11th and December 18th in five different countries.

The Treatment‘s acoustic version of “Running With The Dogs”: