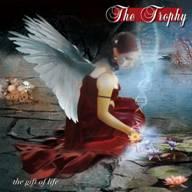 THE TROPHY GIVING ‘THE GIFT OF LIFE’ IN APRIL:

Frontiers Records (www.frontiers.it) is pleased to announce the signing of THE TROPHY for the release of the band’s debut album “The Gift of Life” on April 17th 2009!

THE TROPHY started in 2006 as a way for guitarist and composer Todd Wolf to explore a different side of his songwriting. Until that moment Todd had been working on straight HEAVY METAL stud with his band HUMAN FORTRESS. “I wrote many songs in the past which were too commercial for my main band Human Fortress. I thought these tracks were to good to get lost on my pc”, recalls Todd. So he started to look for the right partners to start up a new band and the chance of a lifetime came about when he met with former JADED HEART screamer Michael Bormann.

Todd tells the story: “I met Michael in the studio with Tommy Newton, who engaged him to sing the background vocals on the Human Fortress debut album. Luckily we kept in touch and when I finished the first songs, I sent them to Michael and he liked them immediately. So we arranged a meeting and the rest, as you will be able to hear, is history!”. Michael immediately shared Todd’s musical vision and joined the band with keyboard player Marco Grasshoff. They have brought their expertise to the song writing and recording sessions. Bormann’s distinctive vocals added the polish and turned great songs into real jewels.

Todd and Michael worked with loops, down-tuned guitar riffs and keyboard effects; the result is an interesting cocktail of Melodic Rock with many influences, while remaining very contemporary in arrangement and style. The final result, THE TROPHY’s debut album entitled “The Gift of Life” is an outstanding example of how perseverance and talent can build an outstanding slice of Rock. “While the main influences of THE TROPHY are Pop, Crossover, AOR and a little bit modern metal” concludes Todd “I think we have created something special. I do not know any band in the world which sounds like us. Some tracks are potential hits. We hope the people out there will love it because we would like to record a second one”.

“The Gift of Life” final tracklisting includes:
The Gift of Life
When Nightmares Wake Me Up
Get The Cup
Justice
Rescue Me
Can’t Get Out of My Head
The Shades of Grey
Gloomy Days
Liar
The Way I Am
On These Wings