The Wild! frontman Dylan Villain was recently interviewed by Aaron Small for BraveWords to promote his band’s third album Still Believe In Rock And Roll, which was released earlier this month. The Wild! line-up for the new album consists of Villain on lead vocals and lead guitar, The Kid, on rhythm guitar, Lucas ‘Boozus’ on bass and newcomer Crash Anderson on drums. 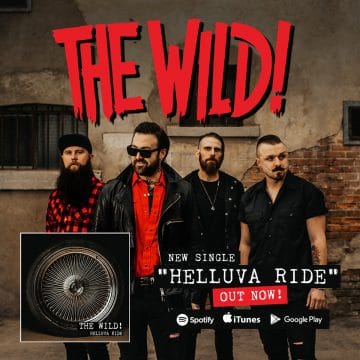 With respect to the line-up change from Reese Lightning to Anderson, Villain indicated: “There’s a lot of stuff I won’t get into, but what I will say is, it was just time for us to make a shift. Sometimes this business is really hard on people; we’re no strangers to any of it. It was the best decision for everybody involved to move forward in different ways. Crash is somebody we’ve known over ten years actually; he’s been a friend to all of us. He’s played in a lot of bands out here on the west coast. It was a really easy transition, but it was a big shift for him. He literally went from touring western Canada every now and again to his first full American run and full European run. He handled it well, he can tour very well; he stepped up to the plate. He’s really been a fantastic addition to the band because he’s a really, really hard worker. And he gets it. He’s a straight-ahead drummer, maybe not as flashy as some, but he’s there where you need him to be, and he’s a great time. The fans love him, fun-loving guy, likes to hang out and drink. It’s been a really positive addition for us, so we’re happy about it.”

In terms of the difficulties in making sure that The Wild!‘s new album was just right, Villain stated: “I will tell you this – the half of that record I’d recorded, you’ve never heard it. No one’s heard it because I scrapped all of it. I wrote this record a few times actually. Keep in mind, it’s been three years since Wild At Heart came out. There’s been a lot of incarnations of the record. There was so much riding on this record that the pressure of it really got to me. But I needed it to sound the way it does, and it took a while to get there. I needed it to be impactful. Then we went back into the studio to record ‘Bad News’, ‘Young Rebels’ and ‘Goin’ To Hell’. At that time, I knew what I was doing with this record. It was actually ‘Bad News’ that set the whole tone of the record in my mind. There were so many other songs before that one, that people will maybe never hear. But there was something about that song… I found that lane as a writer stylistically, and I stayed in it. That’s how the sound and the vibe, the theme of the record came to be. Studio D thing in Los Angeles, on ‘Gasoline’ there’s some wonderful backup singers Ijeoma Njaka and Kandace Lindsey, who I got hip to from the Social Distortion camp. Both those women sang on Sex, Love and Rock ‘n’ Roll – one of my favourite Social D records. They also toured with Social D quite heavily on that album cycle. I just loved their voices! I saw them on that tour. I just hit them up and said, I want you on my record. They’re out in Los Angeles, so that’s where those vocals got tracked.”

You can read the rest of the interview with Dylan Villain at BraveWords‘ website.

The Wild! previously released an EP titled GxDxWxB and a full-length album Wild At Heart, and both finished at #2 on the Sleaze Roxx‘s year-end best albums chart, respectively in 2015 and 2017.

The Wild!‘s “Playing With Fire” video (from Still Believe In Rock And Roll album):