Canadian hillbilly / sleaze rockers The Wild! have released a second video in support of their debut full-length album Wild At Heart, which was released back in February 2017. This time, the group has released a video for its song “Livin’ Free” which was directed once again by Stuey Kubrick. 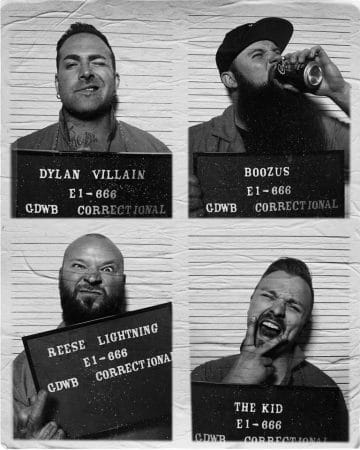 Sleaze Roxx interviewed The Wild!‘s frontman Dylan Villain back in April 2017 and asked him how the band members come up with all their shenanigans in their music videos.

Villain stated: “Yeah, it’s always a tough one with us. Basically, what it comes down to is when we shoot a video, the hard part is, “Wow. How are we going to top that on the next one?” So basically, it’s a whole lot of me sitting there dreaming up and scheming up all these fucking ideas that I know that no other band would do — either wouldn’t have the balls to do or wouldn’t think that they could or should do it or whatever. I mean, that’s what makes us us. You know, that’s what separates us from the pack is that sort of thinking and that mentality. Not just for videos — for music, for touring, for the way we play and the things we do. If someone else is not gonna do it, then that’s what we’re going to do. You know, because that’s just who we are [laughs] and we like that sort of thing. Yeah man, now having shot that one — doing all the shit we did with that one — narrowly escaping all the trouble we almost got in with a lot of that one. It’s kind of [laughs] for the next song and the next video, “Wow. What are we going to do now?” I don’t know how we are going to top it but we’re definitely going to find a way. I tell you that!”