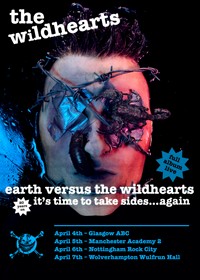 After a three year hiatus, The Wildhearts — Ginger, CJ, Jon Poole and Ritch Battersby — made their explosive live return in front of a sold-out crowd at The Forum in London, on December 17th 2012. This year, The Wildhearts will once again take to the stage to celebrate the 20th anniversary of their debut album ‘Earth Vs The Wildhearts’.

Released in 1993, ‘Earth Vs The Wildhearts’ was voted album of the year by Kerrang! magazine and to celebrate its birthday, The Wildhearts will be taking to the road in April to perform the album in its entirety at four special shows in Manchester, Wolverhampton, Nottingham and Glasgow.

Each night, the show will be split into two halves — the first half of the show will see the original ‘Earth Vs The Wildhearts’ album performed in its entirety, while the second half of the show will allow the live audience to help sculpt the set. Tickets for these shows are now on sale at www.thewildhearts.com and they’re selling fast — the Manchester show has already been upgraded to Academy 1 due to the demand, so don’t wait long to book your tickets!

Support on all four shows will come from Eureka Machines and Baby Godzilla.

For two decades The Wildhearts have remained at the forefront of the British rock scene. From their classic debut album through to 2009’s ‘Chutzpah!’ their creative output and legendary live shows have been second to none.