The Wildhearts to tour playing their entire ‘P.H.U.Q.’ album

The Wildhearts have just announced a tour where they will celebrate the 20th anniversary of their most commercially successful album, P.H.U.Q., by playing it in its entirety. Support will be from the recently reformed Baby Chaos, and lead Ginger’s side-project Hey! Hello!

P.H.U.Q. was released in May 1995 and crashed into the UK Top Ten Album Chart at number six. The album spawned two Top 40 hit singles, “I Wanna Go Where The People Go” and “Just In Lust”, which reached numbers 16 and 28 respectively.

The Wildhearts‘ lead singer Ginger commented: “I can’t wait to get in front of The Wildhearts fans again. They’re the loudest, craziest, most passionate crowd I’ve ever seen, and we’re doing this tour for them. It’s going to be a pretty emotional evening, for everyone. I’m especially excited to be taking Hey! Hello! on the road with us too. This is my new band, and I’ll be concentrating on them full time in 2016. We’ll be recording our new album later this year and I’m expecting to see a lot of love 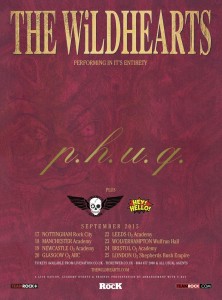 for this group next year, especially from The Wildhearts fans.The world needs new headline bands, and now we finally have one. Watch this space, and don’t miss Hey! Hello! on tour with The Wildhearts in September. Get down early.”

THE WiLDHEARTS – I Wanna Go Where The People Go

The Wildhearts – I Wanna Go Where The People GoDirected by Pamela BirkheadFrom the album P.H.U.Q.Released 24th April 1995Written by Ginger, published by Ging…