The Wild!’s new video for “Ready To Roll” crashes due to overactivity

Canadian hillbilly / sleaze rockers The Wild! released a video for their new single “Ready To Roll” this morning but the video crashed due to apparent unanticipated overactivity. It is expected that The Wild will re-release their new video on November 29, 2016. “Ready To Roll” is the first single from The Wild‘s new album Wild At Heart, which will be released on February 17, 2017. 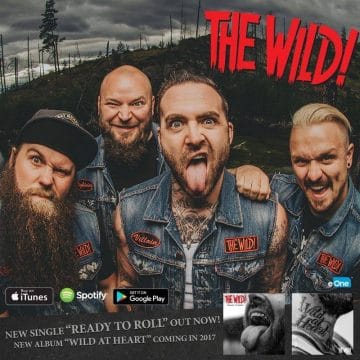 The Wild‘s debut EP GxDxWxB finished #2 on Sleaze Roxx’s Top Ten Albums of 2015. Sleaze Roxx stated the following in that regard: “I have got to say a big thank you to my friend Mark who for at least a couple of months was always inquiring whether I had checked out Canadian rockers The Wild!‘s debut album. Due to my friend’s consistent, determined and gentle “pestering,” I eventually bought The Wild!‘s debut album GxDxWxB and I was simply blown away. Throwing virtually all caution to the wind, The Wild! delivered a rambunctious sleaze and hillbilly filled dose of rock n’ roll, which grabs you by the throat and never lets up. While there are definitely some AC/DC influences on The Wild!‘s debut album, the Canadian rockers take the AC/DC foundations to the next level in a crazy filled yet bluesy melodic way. This was definitely the surprise album of the year and The Wild! will no doubt have a very difficult act to follow on their next album.”

The following message was posted on The Wild‘s Facebook page earlier today:

“Well… It looks like you guys officially broke the internet! Our video for ‘Ready To Roll’ was up for about an hour this morning before crashing due to overactivity with views, shares & posts… We apologize for nothing because frankly we think this is amazing & WE FUCKING LOVE ALL OF YOU FOR THE SUPPORT! It seems we have this issue on the mend & will resume regular viral viewing antics TOMORROW at 10am EST. You guys are crazy, man.
SHARE. THIS. POST!!!!
??⚡️❤️
GxDxWxB“

The Wild playing “Ready To Roll” at Coyote Joes in Lethbridge, Alberta, Canada on November 26, 2016: