The Winery Dogs consisting of Richie Kotzen, Billy Sheehan and Mike Portnoy to tour in May 2019 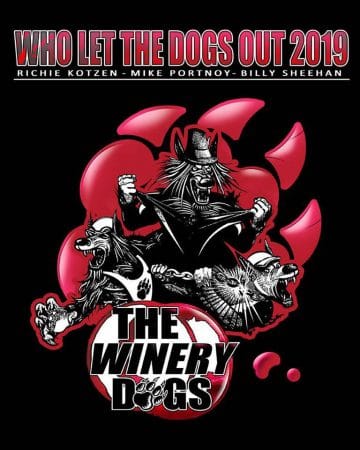 Great news for fans of The Winery Dogs as the trio of lead vocalist and guitarist Richie Kotzen, bassist Billy Sheehan and drummer Mike Portnoy will be reuniting once again and touring in 2019.

“Not only have The Winery Dogs lived up to their “supergroup” billing with their debut album, they have been able to follow it up with an equally impressive sophomore effort with Hot Streak. Even with expectations sky high from fans and critics alike, the talented trio of bassist Billy Sheehan, drummer Mike Portnoy and guitarist/singer Richie Kotzen seem to feel no pressure in delivering the goods time and time again. The complex technical musical wizardry that is often exhibited by the trio has resonated with a lot of Sleaze Roxx readers once again and it seems that The Winery Dogs can do no wrong. If anything, The Winery Dogs have proved with Hot Streak that they are not a flash in the pan and that they can meet or even surpass people’s lofty expectations.”