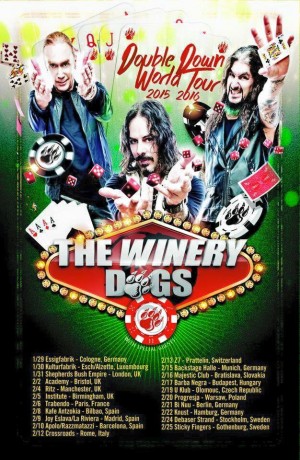 Sleaze Roxx stated the following in its review of Hot Streak: “I find The Winery Dogs‘ Hot Streak is one of the best albums that I have heard this year, and maybe even one of the strongest in Kotzen’s writing career. I believe that the real challenge before these guys will be for the next record to top its predecessor. However, seeing how they pulled it off with Hot Streak, I think the chances are pretty good.”

Sheehan was asked by Sleaze Roxx in an interview who brought the idea for “Hot Streak” to the writing sessions for the new album and he replied: “Yeah, that was a bass line that I’ve had for years that’s a variation on stuff. It’s actually based on a bass line that Stanley Clarke used to use. I used it often and used it on a lot of things. I started playing around with that, then Richie [Kotzen] popped in and we had the song. Generally, that’s how the songs happen. The guys jump in. There’s the song — next (laughs)! I like how we work. We work on a song we finish then we take a break, come back from lunch energized and work on it some more. Richie has such a great voice in my humble opinion. When he applies his voice to anything, he instantly makes it an A+. I’d love to document the process for fans to see. I wish we would have had some GoPro cameras to capture things as they happen, maybe we’ll do that next time.”

The Winery Dogs are currently on a European tour that started on January 29, 2016 and that will see them hit 12 countries in less than a month.