Current The Winery Dogs frontman and former Poison guitarist Richie Kotzen has released a video for the song “Riot” from his latest solo album Salting Earth, which was released back on April 14, 2017. 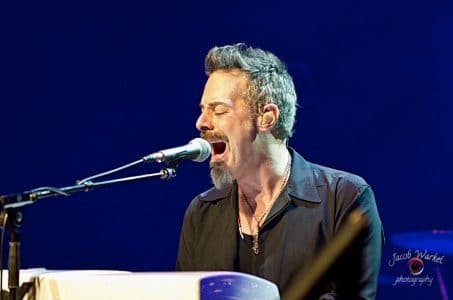 “Guitarist/singer/songwriter Richie Kotzen has just released a brand new video for “Riot,” which was shot on location in Los Angeles, CA by Vicente Cordero. The single will be available on Thursday, June 7 on all digital platforms….

As Richie Kotzen explains, “I’m very excited to share another new song with you all! We made a music video to go with the song and really wanted to focus on the performance of the band more than a storyline. One of the things I love about this track is the interplay between the guitar, bass, and drums. Although I wrote the musical lines we are playing, my goal was to somehow capture the live energy of my band on the final recording. Dylan, Mike, and I have been touring together for seven years and there are some live recordings out there,  but we never spent much time together in the studio recording. I feel like this new recording is a great example of all three of us playing at the top of our potential. I hope you enjoy the new song and the new video!”

Kotzen’s 21st solo album, Salting Earth, was released Friday, April 14, 2017 via his own custom label, Headroom-Inc. The majority of Salting Earth is the result of Kotzen’s one-man production machine, with the exception of Julia Lage adding background vocals to “Make It Easy,” a tasty, sing-along groove stew. “It’s really not deliberate when the record is finished and suddenly I’m the only performer on it,” Kotzen admits. “It actually comes out of my process of writing and documenting my ideas. It started back in the late-’80s when I had a makeshift studio in my parents’ barn. I grew up fairly isolated, and I soon realized in order to get this music out of my head and onto a format where I could listen to it, I’d have to figure out how to do it alone.”

Kotzen’s previous solo release, 2015’s diverse, far-reaching Cannibals, was a well-received hit among his core fan base, and Salting Earth cuts like the aforementioned “End of Earth,” “Thunder,” and “Divine Power” all showcase the scorching guitar solos and soaring vocals that one would expect from a Kotzen solo album. That said, there’s also quite a vulnerable side on display here that’s perhaps best demonstrated in the stripped-down approach to the album’s closing salvo, “Grammy.”

Richie Kotzen and his band continue to tour extensively throughout the U.S. and Europe this summer. A complete list of tour dates can be found on Kotzen’s official website and Facebook.”

https://www.instagram.com/richie_kotzen/https://www.facebook.com/richiekotzenmusichttps://twitter.com/Richie_KotzenThis is the official music video for the R…