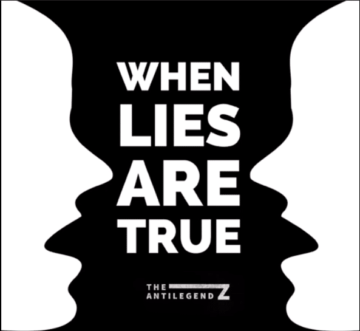 Belgium based TheAntiLegendz, consisting of Mikky Gray who handles all the instruments and vocals, have unleashed a new single titled “When Lies Are True” for streaming from his upcoming new album Kissin The Disease, which will be available on or about November 25, 2021.

Speaking exclusively to Sleaze Roxx, Gray provided details about his upcoming new record as he stated: “I hope that around November 25th, the new record should be out. The new album, it’s the third one and it’s more melodic, heavier and everything is better but still sounding like TheAntiLegendz.”

In terms of what he’s been up t during the Covid pandemic, Gray indicated: “Well, during the Covid [pandemic], we released one single “Snake Girl California” which won’t be on the [new] record. It was just to give something for the fans while they were waiting.”

Gray is a one-man show in TheAntilegendz to which he advised: “Since the first album, it has always been me doing the lead vocals, background vocals, lead and rhythm guitars, bass and drums as well as producing and writing all lyrics and music. I feel the most comfortable with a guitar. I love composing.”

TheAntiLegendz‘s “When Lies Are True” single: