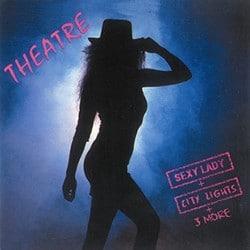 For fans of melodic hard rock, there have always been those hard-to-find ‘Gems’ that are often sought after, but near impossible to find. Chicago’s very own Theatre released a CD back in 1990 entitled ‘Sexy Lady’, and almost ever since it’s been at the top of collector’s lists. When a copy of ‘Sexy Lady’ has surfaced on eBay in the past it has consistently fetched anywhere from $350 to $650. It has also remained a constant Top 10 title on Heavy Harmonies’ eBay rarities list. So what makes Theatre’s music so in demand and desirable amongst hardcore collector’s and melodic rock fans alike? Its commercial, its catchy, and its memorable.

Theatre formed in 1988 and quickly stole the spotlight from the top bands on the Chicago hard rock club scene. The fans loved the catchy sing-along songs combined with a vibrant, non-stop, hard-rocking live show… and word quickly spread. It also didn’t hurt that when the band did perform live, they were well-rehearsed, energetic, and always the consummate professionals. There was something different about Theatre that a lot of the other bands lacked. Maybe it was that ‘X Factor’ that was innate in so many bands — it was something you either had or didn’t have — you couldn’t go out and buy it… Theatre had it!

Theatre best describes their own style as ‘accessible to people with distinctly different tastes’. They combine passionate vocals (featuring three and four part harmonies) with intricate twin guitars, occasional keyboards, and a driving rhythm section that is definitely the backbone of this five piece band. Their songs are derived from personal experiences of love, heartbreak, and the trials and tribulations of life. This helps people to connect with the lyrics on a personal level; the melody that is stuck in your head for a week after hearing Theatre’s music helps people to connect with the band’s music even further.

Theatre was approached by FnA Records in 2013, and with the label’s strong ties to the local Chicago hard rock scene of the ’80s and ’90s, it was a no-brainer that these two entities should unite and give the fans what they have been longing for without draining the consumer’s pocket book. Both FnA Records and Theatre, whom can appreciate the high dollar value of rare albums, also believe that the music was created for the fans and that every fan who wants the album should be able to get their hands on it for a reasonable price. However, FnA Records is known for usually giving the listener more than just a reissue by adding rare bonus tracks, and they definitely won’t let down the fans with the 2013 release of ‘Sexy Lady + City Lights + 3 More’.

‘Sexy Lady + City Lights + 3 More’ features the highly sought after ‘Sexy Lady’ album with the addition of nine additional tracks. Six of the tracks come from the once cassette-only album ‘City Lights’, which was released in 1989, a year prior to ‘Sexy Lady’. ‘City Lights’ flew under the radar as cassettes were starting to lose favor to the compact disc. The cassettes of ‘City Lights’ quickly sold-out of the initial run at live shows and were never repressed or manufactured on CD. As if that were not enough, FnA Records asked Theatre to dig deep in the vaults, and that they did. The band was able to come up with three never-before-released tracks: “Baby”, “Good Love”, and “Stay With Me”.

‘Sexy Lady + City Lights + 3’ More is available at www.FnARecords.net and at reputable retailers around the globe (Amazon, eBay, CD Baby). The album will also have a limited number of autographed copies signed by the band.