This is an article that has been a long time coming. I’ve been friends with Phil Shouse and Jeremy Asbrock for years, first meeting them at a Thin Lizzy tribute concert they put on at the Mercy Lounge in Nashville, Tennessee. After the show, I was greeted with warm hugs backstage because I knew every lyric to every Lizzy song they did and ended up becoming instant friends with those guys. Phil even played two songs on the latest Lipstick album, “You Can’t Stop The Rock” and “Stop”, and those songs ended up sounding really great because of it. 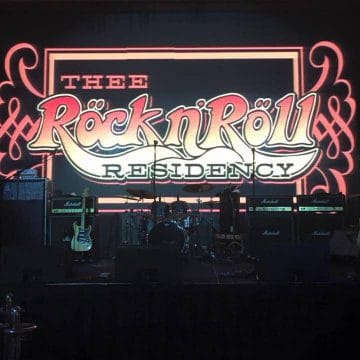 To see your friends succeed in music is a glorious and beautiful thing. Phil and Jeremy are now best known as the guitarists in the Gene Simmons Band, living out their childhood dream alongside Ryan Cook (guitar) and Brent Fitz (drums). You’ve all seen the videos on YouTube, so I don’t need to tell you how great they are with the Demon. But when they aren’t touring with Gene, they are doing a weekly residency at the Mercy Lounge called Thee Rock N Roll Residency, one of the greatest serial rock n roll shows of all time. The residency is a show led by Shouse and Asbrock where they, alongside special guests, cover classic rock deep cuts primarily rooted in the hard rock of the 1970’s.

The residency features a slew of amazing regulars like Greg Mangus, Louis Napolitano, Dana Radford, Judd Fuller, Dakota Denman, Chuck Garric, Ben Denman, Hunter Lovan, Raelyn Nelson, Hannah Fairlight, Jarred Pope and many others. Nashville is home to the greatest musicians on the planet, and there’s a reason why Gene Simmons chose Phil and Jeremy to be in his solo band. Simply put, the two of them are two of the greatest guitar players in the world.

The duo balances technical prowess with emotion and feel to bring classic songs to life in a way that often sounds better than the recordings. This isn’t your Dad’s cover band; the band uses high quality gear like Orange amps and Gibson Les Pauls to create one of the best live tones I’ve ever heard in my entire life. Not only that, the group performs with vigor, energy and enthusiasm of an original group: you can tell these guys truly love the material they play. There’s a great sense of humor and fun that makes every night with the Residency a party as you listen to a great band cover favorites from the likes of Rod Stewart, Cheap Trick, KISS, Thin Lizzy, Ted Nugent, Aerosmith, Van Halen, and more.

The band has had it’s share of great guest musicians play with them. A short list includes Alice Cooper, Robin Zander (Cheap Trick), Roger Glover (Deep Purple), Lzzy Hale (Halestorm), Kip Winger, Damon Johnson (Thin Lizzy), Derek St. Holmes (Ted Nugent), John Corabi (Mötley Crüe), and most recently, Gene Simmons (KISS). The residency offers a chance for fans to get up close and personal to their favorite rock stars in a high energy club setting making for once-in-a-lifetime memories of pure awesomeness. Some rock stars, like Corabi and Zander, are apt to stick around and hang with the fans, so there’s often times a chance to chat with your heroes too. It’s a very laid back atmosphere, as Nashville is an industry city, so it’s not uncommon to see rock stars on a daily basis. What is uncommon, though, is the great sense of unity in the rock community led by the Residency, which has helped united the Nashville rock scene under one roof. Everyone is family and everyone loves each other at the Residency, and that’s why it’s so great.

gene Simmons joins the Residency for the KISS classics Deuce