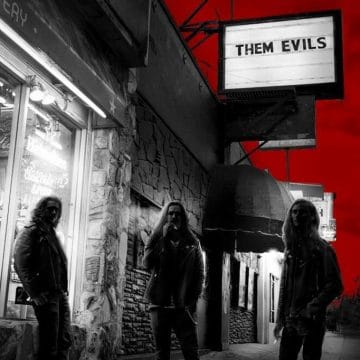 The following message was posted on Them Evils‘ Facebook page today about the video:

“Tonight is the last show after three months on the road. Thank you to The Pretty Reckless and all of you that came out to party with us.

Them Evils‘ bio on their Facebook page states (with slight edits):

“Them Evils are a late-night joyride through rock and roll’s seedy underbelly. Born in the shadows of neon vice and nocturnal living in Las Vegas, nurtured by the proximity of Hollywood’s famed Sunset Strip, and cradled in the same Orange County, CA home that has become synonymous to punk attitude and hard-driving rock history, the leather-and-black clad trio pen unapologetic songs that bristle with a nasty energy befitting their name.

Inspired by equal parts of rock giants like Led Zeppelin, AC/DC, and Queens Of The Stone Age, among others, guitarist/vocalist Jordan Griffin, bassist Jake Massanari and drummer David Delaney pay tribute to their roots with every crushing note on their latest self titled EP, a 4-song homage to the unholy goodness that is Them Evils.

“We pretty much made our own scene,” Griffin says. “We started out doing straight up rock and roll, and that’s what we’re still doing… that said, we’re always evolving.”

Griffin and Massanari moved to Orange County, CA from Las Vegas in 2013, with nothing else to fall back on. It was there they met Delaney – the final piece of the Them Evils puzzle they’d been trying to complete for years. Two EPs later (their self-titled release and the lineup’s Cold Black Love debut) they are set to embark on their longest tour to date, which includes a fall headlining jaunt set to run directly into a full tour in support of The Pretty Reckless.

Buckle up, this is gonna be one hell of a ride…”