The Burr Festival is back on March 9, 2019 for its third edition. The profits from these shows go to MS Action Fund in Walthamstow, England, who provided care and facilities to former Iron Maiden drummer Clive Burr throughout his battle with multiple sclerosis, and who continue to work with his partner, Mimi, who also has the illness. 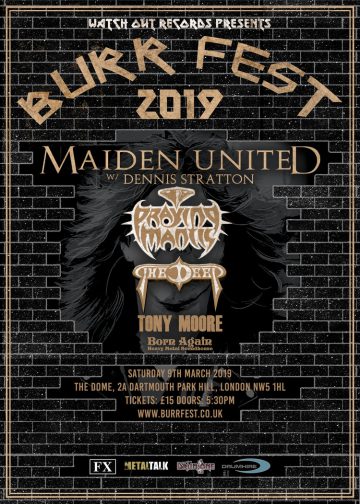 “Burr Fest is back for it’s third year!!!

This year, we are moving to a new venue, with double the capacity of previous year. With that, come bigger bands!

We are immensely proud of the line-up this year, and hope you all enjoy it and we can continue to grow Burr Fest!

Opening the bill will be the only man to have ever been an official keyboard player for Iron Maiden… Returning for his 2nd Burr Fest outing, is Tony Moore!

Joining him, will be the fantastic The Deep! Featuring former members of Deep Machine and Airrace, the band were formed in 2013 and released their debut album “Premonition” in 2015. With a couple of line-up changes, the band are back on the road and set to hit the studio to record their second album.

Our main support for 2019 comes in the form of NWOBHM legends, Praying Mantis! Having boasted no less than 4 former Maiden members amongst their ranks over the years, Mantis released their latest album, Gravity, in May 2018, which has received a fantastic response so far.

Which leads us to your headliners for 2019…

Ladies and Gentlemen, we are extremely proud to announce that headlining Burr Fest 2019, will be the amazing Maiden uniteD!!!

Formed by Ruud Jolie (Within Temptation) and Joey Bruers (Up The Irons), the group perform acoustic rearrangements of Iron Maiden classics, and rarities. For this headline set, the band will also have a very special guest, in the form of former Iron Maiden and Praying Mantis guitarist, Dennis Stratton!

Tickets will be on sale from Friday at 9am, at the link below, and directly from the venue.