The third edition of the RockNPod Expo will be taking place at the Nashville Airport Marriott in Nashville, Tennessee, USA from August 9 to 10, 2019 and will feature members of Kix, Stryper, Megadeth, Saigon Kick, Tora Tora and more. 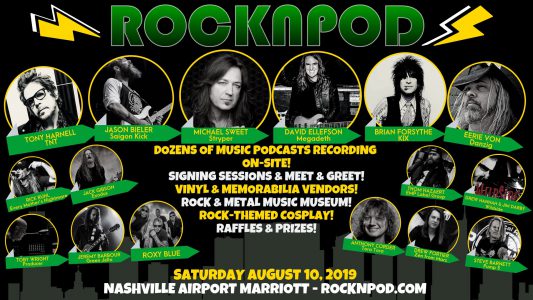 This unique experience gives fans an opportunity to meet their favorite rock stars, attend on-stage panels with the guests, purchase vinyl and memorabilia from vendors, participate in a cosplay contest, win prizes in our RockNPod raffle, tour a RockNPod museum featuring stage played/worn gear and learn about the growing trend of music podcasting.

RockNPod is equally a beneficial trade show for music podcasters. Now in year three, the community that has sprung from RockNPod has resulted in several new podcasts, great new friendships formed, and the launching ground of a ton of content that comes from this expo. Registered podcasters have the opportunity to record on-site at their own table, interview celebrity guests, attend an education track featuring great speakers and workshops that will help build your audience and following. Most importantly, it’s a fantastic networking event and way to promote your show in person!

Here’s the lineup for RockNPod Weekend

* On-stage panels with our guests featuring in-depth q and a sessions.

* Numerous raffles and contests that give you the opportunity to win!

* Rock-themed cosplay judged by a panel of our special guests.

David Ellefson Basstory / Rare Hare show Saturday August 10th 7 pm – 11 pm featuring solo bass performance with David‘s celebrated brand of storytelling, as he recounts intimate details of his struggles and triumphs in the name of rock ‘n’ roll. “Basstory” will also include special VIP meet-and-greets, exclusive merchandise, and more. David’s set will be followed by Rare Hare; a confluence of Nashville pro musicians cranking out some of the best hard rock and metal deep cuts you’ve ever heard!