Thor recalls disagreement with W.A.S.P. over each band’s use of props at concert back in 1984 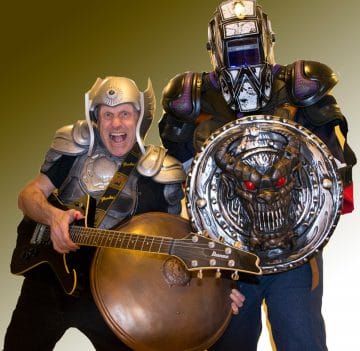 The mighty Thor is currently touring throughout Canada and was interviewed yesterday in Montreal, Quebec by Jimmy Kay for Canada’s The Metal Voice.

Thor was asked about an argument that he had with W.A.S.P. frontman Blackie Lawless back in 1984 to which he advised (with slight edits):

“What happened was in 1984, we were playing with W.A.S.P. in London England and we had big props like lasers which were shooting out of lion statues and pillars. And W.A.S.P. had the big buzz saws on stage. We both had hits on the radio they had ‘Fuck Like A Beast’ and we had ‘Thunder On The Tundra’ and so  it was a battle over the props really. Their management went against our management Douglas Smith who also managed Mötorhead and they are fighting about the size of the props, it was a props argument. Yeah, my hammer is bigger than your hammer kind of thing. We tried to do a settlement but then after we had an after-party and they were kind of were snooty you know. I said, ‘Don’t you guys get snooty with me. Go fuck yourself.’ I got a little heated.”