Thor to play four shows in Ontario, Canada in support of new album ‘Beyond The Pain Barrier’

Canadian legendary rockers Thor will be playing four shows in the province of Ontario in Canada from November 22 to 25, 2017 in support of their new studio album Beyond The Pain Barrier, which was released back in August of this year. 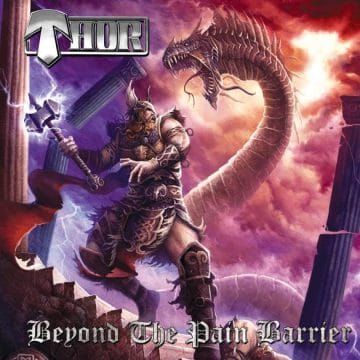 “Thor reclaims the classic metal throne with a brand new studio album of 12 original songs that will get your blood pumping and leave your ears ringing! Titled “Beyond The Pain Barrier,” Thor‘s new album was released August 4 to coincide with his performance at the Porispere Festival in Finland. Thor will be playing several shows in support of his new release.”

Wikipedia states the following about Thor (with slight edits):

“Thor started out as a concept band in 1973. They used the names “Thor”, “Centaur” and “Mikl Body Rock”. These entities were the brainchild of Jon Mikl Thor, a vocalist, musician and body building champion who won titles such as Mr. USA and Mr. World Canada. He decided to combine muscle with music. In every show, Jon Mikl Thor would appear as “Thor The Rock Warrior”. Mikl Body Rock aka “Thor” toured throughout North America seeking fame and to garnish enough attention to secure a record deal. The press dubbed them “Kings of Muscle Rock” or “Warriors of Gladiator Rock”.

In 1976, Jon Mikl met guitarist Frank Soda while touring Canada. Frank Soda joined “Thor” who also became known as “Thor and The Imps“. The band toured constantly in the Eastern USA and Canada region building a large following. The first album was recorded in Toronto, Ontario, Canada under the name Thor and was called Muscle Rock. Released by the independent label God Of Thunder Records, the record became a success, and gained the attention of various managers and producers who wanted to sign the act. Jon Mikl Thor was offered a large deal to star in a production at the Aladdin Resort & Casino in Las Vegas called ‘Red Hot and Blue‘. Frank Soda wanted to keep touring with the band, so Frank Soda and The Imps were formed. Jon Mikl Thor went on to star in Las Vegas and was discovered by Merv Griffin, who had Thor perform live on the Merv Griffin Show from Caesars Palace on national television. Thor‘s performance was a hit, and offers came in from various major labels. Thor decided to sign with RCA Records in late 1976. 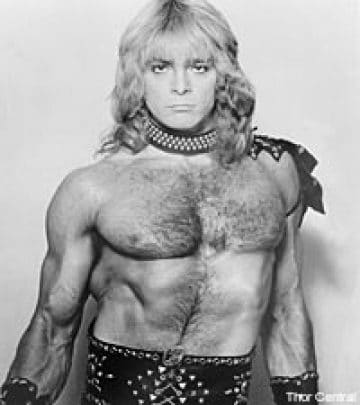 This new incarnation of Thor was formed in 1977 by Jon Mikl Thor and released their debut album Keep the Dogs Away. After much touring, Jon Mikl Thor resided in New York City. He formed a new band with backing members Rusty Hamilton aka Queen Pantera, Mike Favata, Jimmy Ambrose, James Whang and Keith Zazzi in 1983 and released the Unchained EP. The record, which was on Mongel Horde Records in the USA got picked up for distribution in England through Albion Records. The band travelled to London, England to perform at the Marquee Club. They were sensations overnite and signed with Motörhead‘s manager Douglas Smith. In 1984, the band decided to live in the UK. Most of the time was spent at Studios in London, writing and recording new material. The songs “Let the Blood Run Red” and “Thunder on the Tundra” became instant chart toppers with “Thunder on the Tundra” reaching number one on the British rock chart.

The success of the singles soon led to 1985’s album Only the Strong. Thor‘s stage performances involved antics such as Jon Mikl Thor breathing into hot water bottles until they burst, breaking bricks over his chest and head and bending steel bars and microphone stands. In 1986, Thor released Recruits – Wild in the Streets on GWR Records. The band would break up in 1987 and Jon Mikl entered the world of acting, starring in such movies as Recruits (1986, as Thunderhead), Zombie Nightmare (1987, as Tony Washington), and Rock ‘n’ Roll Nightmare (1987, as John Triton).

Ten years later in 1997, the band released the compilation album Ride of the Chariots (An-Thor-Logy). Following this release, the band returned with new material and in 1998, they released Thunderstruck (Tales from the Equinox) and have since released five additional albums. 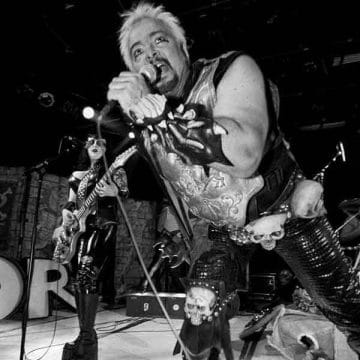 In April 30, 2011, Thor headlined the Shock Stock Festival in London, Ontario, Canada. The band consisted of original guitar player Frank Soda as well as new additions Joel “Savage” Watts on drums and Sean “Killer” Kilby on bass. Then Thor embarked on a tour of Scandinavia from May 31 to June 7 playing at DOM (The Dome) in Helsinki, Finland on June 1, performing their live rock opera and showcasing film Thor – The Rock Opera; then revisiting the Muskelrock Festival in Alvesta, Sweden from June 2 to June 4.

In January 2012, a special edition vinyl album called Thor’s Teeth was released through the Baltimore-based label A389 Recordings. It was later launched digitally through Chicago based Smog Veil Records on April, 2012. Thor signed a multi album deal with Rock Saviour/Pegasus Records in Germany and Frank Soda returned to the studio with Thor to write songs and lay down vocal tracks for albums Thor – Thunderstryke (2012) and Thor – Thunderstryke II (2013). On July 20, 2012, Thor headlined the Armstrong MetalFest at Hassen Arena.

In 2014, Thor re-released their 1985 album as Only the Strong Deluxe Edition distributed by Deadline Records.

The new documentary film I Am Thor directed by Ryan Wise and produced by Ryan Wise and Al Higbee had a world premiere in 2015 and featured Thor. In 2015, the movie I Am Thor toured film festivals throughout the world winning audience and critical acclaim. The movie got picked up for distribution in the USA through Dark Sky Films / MPI Media Group. The film won Best Documentary at the Fantasia International Film Festival 2015 in Montreal. Thor led by Jon Mikl Thor embarked on a sold out major city tour throughout the USA in November, 2015 screening the movie I Am Thor followed by a live Thor concert. In March 2016, Jon Mikl Thor took Thor on a North American tour presenting both the screening of the film and a live concert.

On May 13, 2016, the official reissue of Thor‘s 1977 Keep the Dogs Away album will be released on Deadline Records. ‘Thor a Rock Odyssey‘, a live three part Rock concert spectacular, will be presented on stage at the Highline Ballroom in New York City on May 14 in celebration of the 1977 Keep the Dogs Away album and to launch the release. This mammoth event will star Jon Mikl Thor.

On August 4, 2017, the full length album Beyond the Pain Barrier was released. The album was co-written by Jon Mikl, John Leibel and Ted Jedlicki. Prior to the album’s release, the single and video for “The Calling” was released.”

THOR – The Calling (Official) Get it on Bandcamp:https://thormusic.bandcamp.com/album/beyond-the-pain-barrierFollow Thor on social media:https://www.facebook…