The M3 Rock Festival is back for its 12th edition from May 1 to 3, 2020 and the line-up promises to be a great one with some nice surprises including newcomers Accept, Doro and Little Caesar along with Bang Tango‘s original line-up. 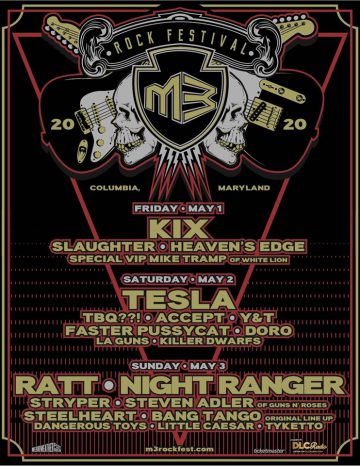 KIX — Maryland State’s “hometown” favourites are the only possible headliner on Day One and are sure to set the bar very high for all of the other bands at M3 once again. Luckily, M3 has done the wise thing and given KIX the top billing for its opening night as no band really wants to follow KIX on Day One.

Slaughter — Appearing for the sixth time in 12 years at the M3 Rock Festival, Slaughter have their work cut out as they will likely be playing just before the hometown favorites KIX. Will Zoltan Charney be in the line-up? We certainly hope so as the show stopping drummer could assist Slaughter in not getting totally crushed by KIX‘s performance.

Heaven’s Edge — After having to pull out of M3 last year (the 2019 edition), Heaven’s Edge are back but without bassist George “G.G.” Guidotti who sadly passed away back in August 2019. Heaven’s Edge are most likely to put on the most emotional set as the group is apparently forging ahead without Guidotti.

Mike Tramp (for V.I.P. ticket holders) — How fitting that the king of acoustic gigs will be at the M3 Rock Festival to deliver presumably — an acoustic gig. Given M3’s ’80s era emphasis, how much White Lion material will Tramp include in his short set?

Tesla — Crowd favourite and perennial M3 headliner Tesla are back with their new studio album Shock to support. How many songs will Tesla squeeze into their abbreviated festival set?  We are expecting one or two new songs from Shock at most.

TBQ ??! — Although this band has yet to be announced, our money is that it will be Queensrÿche given that they have a concert booked at the Turning Point Casino Resort in Verona, New York, USA on May 1, 2020, which is less than six hours away from the M3 Rock Festival location. In addition, the positioning for the surprise band on Day Two of the M3 poster seems perfect for a group of Queensrÿche‘s stature.

Accept — The German heavy metal veterans will be making their likely much anticipated debut at the M3 Rock Festival. It will be interesting to see whether Accept elect to play more Udo Dirkschneider era material given their likely abbreviated set and the M3 audience’s apparent preference for ’80s era hard rock and metal songs.

Y&T — Sixty five year old Dave Meniketti is back along with his Y&T supporting cast. Despite some health care issues of late, Meniketti keeps touring away and the group now has a cool new documentary to promote.

Faster Pussycat — For the fourth time in five years, Faster Pussycat will be playing the M3 Rock Festival. Expect a very similar setlist from the band who has a tendency to play the same songs from one year to another.

Doro — This is the biggest surprise as the Ultimate Metal Queen — as dubbed by the Sleaze Roxx readers — will be making her debut at the M3 Rock Festival. One can only hope that Doro plays a healthy number of Warlock ’80s era songs to please the M3 audience.

L.A. Guns — Which version will it be? Golden Robot Records and singer Kurt Frohlich have now confirmed that it will be the L.A. Guns version spearheaded by drummer Steve Riley and bassist Kelly Nickels who will be playing once again at M3. One massive hint was where L.A. Guns were positioned on the M3 poster. One thing is certain. Riley has his ego in check and knows a good thing when he sees it. Playing the M3 Rock Festival, no matter where you are on the bill, should be considered an honour and the business minded Riley appears to get along quite well with the M3 organizers.

Killer Dwarfs — Five years after making their M3 debut, the Dwarfs are finally back. Hopefully, the band will get to play a few more songs than last time (back in 2015) and include its classic track “Heavy Mental Breakdown.”

Ratt — Sleaze Roxx predicted that Ratt would be headlining M3‘s 2020 edition and although Warren DeMartini will apparently not be in the line-up, at least it won’t be the now apparently defunct Bobby Blotzer led Ratt version playing the M3 Rock Festival. Stephen Pearcy has always been the voice of Ratt and even if bassist Juan Croucier wasn’t in the band, the singer should be allowed to proceed with Ratt as he sees fit.

Night Ranger — This is the band that everyone should be wary of as Night Ranger have the potential to steal the show.

Stryper — Stryper are probably the only band at M3 to have gotten heavier music wise since their late ’80s / early ’90s golden era. Given guitarist Oz Fox‘s health struggles of late (brain tumours), one can only hope that the guitarist will be in the line-up at M3.

SteelHeart — SteelHeart frontman Miljenko Matijevic still has a great voice and you can’t go wrong getting to hearing the man belt out a few classic Steel Dragon songs along the way.

Bang Tango original line-up — After a number of years, guitarist Mark Knight got his wish and the original line-up of Knight, singer Joe Lesté, guitarist Kyle Stevens, bassist Kyle Kyle and drummer Tigg Ketler will be back together playing a high profile gig. It will be interesting to see how they fare as Sleaze Roxx ranked Bang Tango‘s performance last year (with Lesté, bassist Lance Eric, drummer Tim Russell and guitarist Steve Favela) dead last overall (among the 21 acts). Will the remaining original line-up members make a difference? We certainly hope so.

Dangerous Toys — After a very impressive showing at Rocklanta in March 2019, Dangerous Toys looked poised to make a big splash at M3‘s 2020 edition.

Little Caesar — Another big surprise is seeing frontman Ron Young and company finally getting the opportunity to play the M3 Rock Festival. They might just well come up with one of the best performances at M3‘s 2020 edition.

Tyketto — The “Forever Young” looking Danny Vaughn will be putting a lot of pressure on many other lead vocalists at M3 due to his fantastic vocal delivery. It will be interesting to see whether Tyketto will still be pushing the 25th year anniversary of their Strength In Numbers album or whether they will deliver more of a greatest hits type of set.

Of note, there are still some bands to be announced onto the M3 roster for 2020. Sleaze Roxx had made some predictions (just for fun) on which bands would make M3‘s upcoming 12th edition and ended up getting ten of them right (so far), consisting of Accept, Bang Tango, Faster Pussycat, Killer Dwarfs, KIX, L.A. Guns (feat. Steve Riley and Kelly Nickels), Queensrÿche (I’m pretty sure that they will be playing), Ratt, Slaughter and Tesla.