There have been quite a few artists and bands that have contracted Covid since they started playing concerts again. The list includes Paul Stanley (KISS), Sebastian Bach, Frank Hannon (Tesla), Classless Act, Tom Rampton (The Treatment) and now three American Bombshell members. 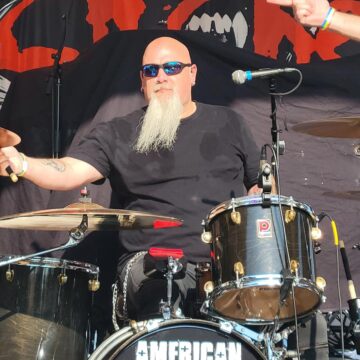 “Some people already know, but for those who don’t, I figured I would share my story with Covid. A couple weeks ago, myself and a couple band members contracted Covid while at an out of town show. We had two shows, both with decent crowds, but neither were packed to the rafters. I was vaccinated with Moderna back in Feb/Mar, but still caught the virus. This delta variant is no joke. That being said, I had one day of pretty tough symptoms, but for the rest of my quarantine period they went from very mild (early on) to almost non-existent towards the end. I wholeheartedly feel this was a result of being vaccinated. The other guys have had a MUCH tougher experience, neither had been vaccinated.

I’ve been isolating in the house for almost 2 weeks, wearing a mask and sleeping in another room. Chris Goody Carr hasn’t become infected. Two weeks of living in the same house as someone with Covid. I feel like this is due to being careful with isolation, and both of us having been vaccinated (she received Pfizer). Another aspect of the vaccine is much lower potential to spread FROM you. None of the vaccines have stated 100% effectiveness, but that shouldn’t negate the benefits of what help the vaccines can provide overall, and the effectiveness they DO offer. This post isn’t to prompt vax arguments. For the most part, anyone who planned to be vaccinated have had time to do so, and there comes a point where it just becomes a conversation to avoid so as not to lose friendships over it. I’ve seen posts saying “I don’t even know anyone who’s been affected by any of this”. Well, if you’re on my friends list, now you know someone, and you’ve heard my story. Take from it what you will, and above all, be nice to each other and stay safe.”

“Heads up Bomb Squad, we are unfortunately going to have to back out of Cornstock next Sunday. We’ve got a couple of our guys still not up to 100% from our bout with Covid, and we absolutely do not want to give you a show that’s not at our best. Thanks to DL Sanders, Dusty Rice, and everyone with Cornstock for their work on the event.”

American Bombshell performing “Money On The Liquor”, “Insane”, “Raising Hell and Living”, “Sin”, “No Regrets” and “Like The Rest” at The HiFi Annex in Indianapolis, Indiana, USA on August 1, 2021: