Three former original members from BulletBoys — guitarist Mick Sweda, bassist Lonnie Vencent and drummer Jimmy D’Anda — have teamed up with Best Of Seven singer Shane Tassart to form a new group called Lies, Deceit & Treachery. The focus of the group appears to be playing the BulletBoys songs that they are known for in a live setting. 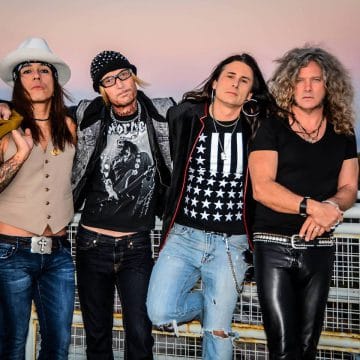 “Lies, Deceit and Treachery is the fusion of three former original members of BulletBoys and Best of Seven singer Shane Tassart. Mick Sweda, Jimmy D’Anda and Lonnie Vencent were the driving force that gave BulletBoys their powerful trademark sound. They are back, and with the help of Shane’s dynamic vocals, are bringing the sexy and punchy BulletBoys sound that fans remember and still clamor for.

Fun, with energy and professionalism. These are just some of the words to describe Lies, Deceit and Treachery’s live shows. The vocals are soaring. The musical nuances and glorious excesses heard on the records are ever present. These guys love playing these songs and it’s very clear they have an inherent bond and a comfort level that gives the audience something very special.”

Lies, Deceit & Treachery playing “Smooth Up In Ya” live at the Buffalo Rose in Golden, Colorado on March 14, 2015:

Lies Deceit and Treachery Smooth Up In Ya

Lies Deceit and Treachery filmed at the Buffalo Rose in Golden, CO 3/14/15 by Rob Hodge for Rob’s Rockin’ Retreat