Either Ratt drummer Bobby Blotzer is cleaning house, he has a mutiny on his hands and/or a combination of the aforementioned options as three of the five band members that comprised his version of Ratt in the last six months have departed or about to depart the band in a span of less than three weeks.

After the departures of guitarist Nicholas “Blaze” Baum and bassist Robbie Crane, it is now guitarist Doc Ellis‘ turn to announce his departure from Blotzer‘s version of Ratt. 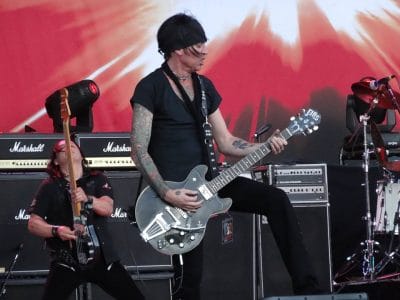 “Ok. You know the rules. Don’t care?… Keep scrolling…. But for You…..
Here is the deal.
I gave my notice aug 1….
Said I would fill out the month and then hang up my Gun. And just ride…….
You’ll hear no Slander and Bitching from me.
All I’ll say is.
I thank Todd Kerns for Filling in on my last shows. My last being the 18 of aug.
Josh. Love you.
Blaze. Love you
Robbie and Craig.
Thank you for letting me see what true friendship was again. I had forgot. I really enjoyed watching you two just be you.
“Nutz” completely enjoyed our time. And certainly there is no problem with a feast on our time.
Bob. Thanks for the opportunity to play the songs for the people that wanted to hear it… Something I will never forget. I wish you all the best.
To the folks Who decided to follow me in my time out with B.B.
I thank you. Gabba Gabba Hey.
And to the folks who have continued to follow me..
I Love You. And I’m gonna try to show it more.
Gabba Gabba Hey HEY ROCK AND ROLL!!!.
If ya need me?
I’ll be around.
Michael “Doc” Ellis.”

Blotzer‘s version of Ratt unveiled its latest line-up at the Buffalo Chip Campground in Sturgis, South Dakota, USA on August 11, 2016 when guitarist Stacey Blades (who replaced Baum) and bassist Todd Kerns (who replaced Crane) were now part of the band.