Sleaze Roxx readers might remember the Australian sleaze rockers Skärlet whose debut self-titled album finished at the #9 spot on the Sleaze Roxx’s Top Ten Albums of 2016. Unfortunately, a few months later, Skärlet, which consisted of guitarist Mitch O’Shea, drummer Tommy Rocka, bassist Will Saw and lead vocalist Axel Winter, announced that they were disbanding “due to differing musical differences and goals.”

The good news is that three of the four Skärlet members have started a new band called Outläw with a new guitarist by the name of Bailey. Outläw‘s debut single will be released on October 26, 2022 and the group will be releasing not one, but two albums, in the foreseeable future. Outläw also have a number of shows lined up including at the Bar Open in Fitzroy, Victoria, Australia on November 4, 2022 and at the Cactus Room in Melbourne, Australia on November 19, 2022.

Speaking exclusively to Sleaze Roxx, Tommy expanded on the reasons why Skärlet disbanded in the first place. Tommy indicated: “I guess sometimes in a band, things change and people change. It’s just the course of life. We were having a lot of problems at the time and there was a lot of internal conflict which all just became too much. As a result, people were coping in different ways. In the end, we decided that as proud as we were of the work that we had done, the way it was affecting us on a personal level and what it was doing to us outside of the band couldn’t continue despite every effort we had made to do so. We tried to rekindle things and get them to work, but in the end it just wasn’t plausible. People were absolutely having different goals and ideals to others, but that was really only a base issue.”

In terms of who initiated the idea of reforming as a band, Tommy revealed: “Outläw actually began as a solo project of mine. After Skärlet had ended, I tried to convince Axel and Will to start up a new band and carry on what we had done, but they were both not really in a place where they were ready to do so, which to be completely honest was understandable. I was still in counselling myself [laughs]. We did eventually try to get something going with another guitarist but it just wasn’t working, so we took a break. I went to New Zealand for six months and when I came back, I tried to get something going again but nobody was really interested. It was then that I started writing material for what would become the Ecstasy and Pain albums. Around that time, Will had joined Dangerous Curves but had said he would help me with recording the bass parts and encouraged me to keep writing songs and learned a few riffs I had laying around. I asked Axel to record the vocal parts for me if I gave him the material to which he agreed. It was then that he got enthusiastic about the work and he started to collaborate on material with me and create and give ideas too. That’s when the band really started to come together again.”

With respect to Skärlet guitarist Mitch O’Shea not being part of the Outläw line-up, Tommy stated: “Mitch‘s interests in music have changed a lot since we began Skärlet and he has since actually had a really great career working in the radio business and found joy in working more behind the scenes on music with a bunch of different artists in Melbourne. At the time, he had a lot of conflict with us three and we couldn’t co exist together any longer. Since then, we’ve returned to being good friends — kissed and made up so to speak — and he has actually had a huge role in these albums which turned out to be a great thing that has been beneficial to everyone. We have been working closely with him being the mix engineer and helping with a lot of great production techniques and advice for the vocals and guitar tracking in particular. It was great to reconnect with him professionally and personally after years of separation and I couldn’t be more thrilled with how it’s turned out for everyone.” 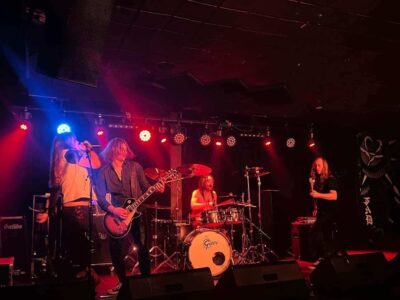 Tommy was asked about the process of finding a new guitarist to which he replied: “In regards to finding someone to take his spot, that was actually our biggest problem and eluded us for literally a good year or so. Mitch is such a good player and musician that we needed someone who was going to be able to live up to that expectation from fans of the band, work with us as a musician, have great chemistry, but most of all, work with us as a person. After trying a few people and deciding nobody was right, Axel and I actually decided he [Axel] was going to record the guitars, as we wouldn’t let anything stop us from getting this done. One day, I saw someone called Bailey make a post in a chat group looking to start an 80’s style tribute band and saw a list of bands we loved as the influences so I reached out to him. We met up, jammed, and he got the gig! He has been instrumental in making the songs come to life and giving them that extra kick. I have really enjoyed working with him on the records and he has contributed some fantastic playing that we cannot wait for everyone to hear. He has the same vision, the chops, the aim and determination that is needed to go the stretch and he is prepared to do whatever it takes and work hard which are all necessities if you want to try to survive this hell of a business. He was the element we needed to round the group off and we couldn’t be happier to start this new journey and chapter with him.”

In terms of how Outläw‘s material will differ from the songs on Skärlet‘s debut album and not forging ahead under the band name Skärlet, Tommy opined: “As most of these first two albums were written by Axel and I, I’d say the biggest difference is that the guitar riffs in some songs may be a little more simpler and stripped back overall, but even then there’s a lot of intricate stuff on there and it still has that sleazy glam / hard rock appeal that Skärlet was known for. There are also a lot more of a variety of songs on these releases like ballads and epics, something that Skärlet intentionally didn’t release as we had chosen to make a “balls to the wall” rock album. There’s even a single that you’ll hear soon which has piano in it for a majority of the song before the whole rock band kicks in at the end. We ventured out a lot more with the types of songs whilst keeping in with the glam and hard rock vibes and I think we found a really good balance between it all. There’s light and dark, emotion and passion, sex and sleaze, grit and lust, love and hate. It’s all in there.”

As for not continuing as Skärlet, that is something I personally would liked to have done, but wasn’t really able to do for other reasons. Plus everyone in Skärlet had decided to end it there and keep that as that and I have respect for that and the wanting to do so. So rather than being hung up about it, I look at it as a fresh start, a new band — and although pretty much Skärlet 2.0 — a chance to start again and really carve out our own path. We have a new wind in us and we’re ready to hit the ground running! Good things come to those who wait. Was it hard to listen to people talk about Skärlet and how good it was all the while battling to make this happen in radio silence? Absolutely. But I really feel like this overdue wait is going to be justified and to everyone who enjoyed Skärlet, I think you’re gonna love Outläw! If you listen to the records and singles, I can guarantee that you won’t be disappointed.”