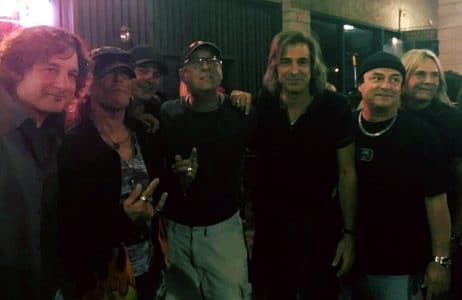 The photo of course sparked speculation that the five musicians may get together again as Ratt despite that drummer Bobby Blotzer is currently using and touring under the name Ratt with other musicians including singer Josh Alan (ex-Sin City Sinners).

About three hours later yesterday, a tweet was posted on Pearcy‘s Twitter account with another photo of the five in question with the caption “Happy B Day Lonn, good seeing ya last night. Great bash.”

Blabbermouth has reported today that Pearcy, DeMartini, Blotzer, Cavazo and D’Angelo were all together on the evening of Friday, July 29, 2016 for the Los Angeles birthday party of former RIP magazine editor Lonn Friend.

One has to think that Pearcy originally posted the photo on Facebook to playfully gage what the public reaction would be to having the three fifths of Ratt‘s classic line-up (Pearcy, DeMartini and Croucier) with Cavazo together again along with D’Angelo.