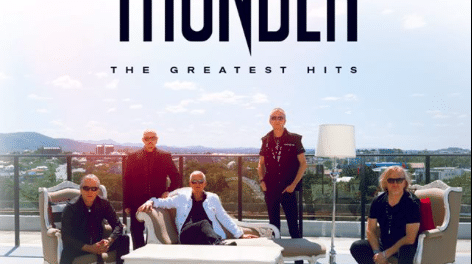 Thunder to release album ‘The Greatest Hits’ on September 27th

UK rockers Thunder will be releasing the greatest hits compilation album The Greatest Hits on September 27, 2019.

The following message was posted in part on Thunder‘s Facebook page earlier today:

“It’s 30 years of Thunder this year, so we’ve decided to release the first ever band curated Greatest Hits compilation, on September 27th 2019. 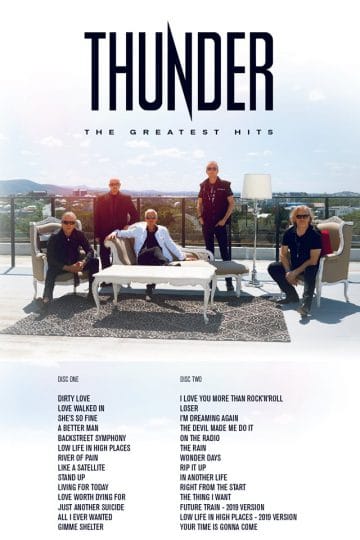 Thunder – The Greatest Hits will feature at least 1 track from all of our 12 studio albums.

There’s even a couple of our favourite covers thrown in there too. We hope you’ll like having all the bangers in one handy place.

There will be 28 remastered tracks on Triple Vinyl, 2xCD, 3xCD & Digital formats. The 3CD version includes the live show we streamed at Planet Rock’s London studios on January 18th this year. The artwork is chock full of memorabilia pics and interviews too.

We’ll post the details on how and where to buy it at that time.

To celebrate the release, we’ve decided to play a one-off intimate show at The Garage in London.

This will take place the day before release on September 26th. All profits from the show will be donated to Childline/NSPCC.

It will be a full on electric jump up and down show, so it will be very loud, very sweaty, and very special.

In early July we’re going to invite all Garage ticket buyers to enter a free sound check competition for the show.

Winners will get to attend the soundcheck and hang out for a bit with us, do pics etc.

For 1 day only, on Thursday June 27th, we’ll have a limited number of Greatest Hits CD + Garage ticket “Combos” for sale on Thunder Shop. All proceeds from the sales there that day will also be donated to Childline/NSPCC.

The first 500 copies of all 3 formats will come with a silver embossed “All Killer – No Filler” sticker.

Every “Combo” purchaser will be auto-entered into the sound check competition, and Combo Winners will get their copy of the album signed and given to them by the band, on the day.

The rest of the Garage tickets will go on sale at 10am on Friday 28th June.

We’ll post all the details here at that time.

Thunder is an extremely underrated Rockband from the UK. It was founded in 1989.This video was taken from their “Flawed to perfection DVD”. Great music. In m…