Canadian hard rockers Thunderbird are set to release their self-titled third studio album via Delinquent Records on April 25, 2018. This follows the albums What’s The Word? (2006) and Heavyweight (2016). 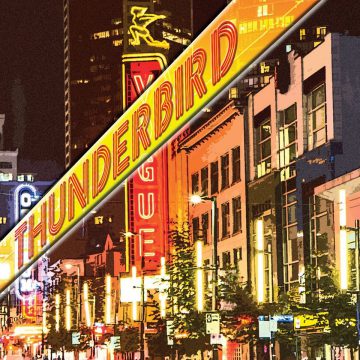 The following message was posted in part on Thunderbird‘s Facebook page back on October 31, 2017:

“Thunderbird‘s upcoming album has just been mixed by the legendary Mike Fraser, who has done a phenomenal job. We are looking forward to sharing the songs with you soon!

Mike‘s credits are far too long to list here, but just a few of the bands he has mixed include AC/DC, Van Halen, Led Zeppelin, Aerosmith, Guns N’ Roses, Whitesnake, Rush, Metallica and many more!”

Sleaze Roxx stated the following in its review of Heavyweight:

“Upon seeing that Heavyweight contained a whopping 16 tracks, my first thought was that there is sure to be quite a few duds on the album. As it turns out, there are only a few duds on the album and most of the songs range from decent to quite good. Thunderbird definitely try and successfully capture the ’70s classic rock feel in most of their songs. Frankly, if you like good ol’ fashioned slowed down ’70s classic rock, Heavyweight will be quite the treat. The album is quite the throwback to simple guitar riffs that have lots of room to breathe throughout the songs due to the slower paced adopted most of the time. I would have much rather liked if Thunderbird weeded out the weaker tracks to deliver their ten best songs rather than include sixteen songs of varying quality.”