About two months and a half ago, bassist Majsan Lindberg announced that she was taking some time off from Thundermother to focus and finish her education. Lindberg had previously not been in Thundermother‘s line-up when the group, which includes lead vocalist Guernica Mancini, guitarist Filippa Nässil and Emlee Johansson, performed a virtual live stream concert from the Olympic Stadium Berlin in Berlin, Germany on May 11, 2021. 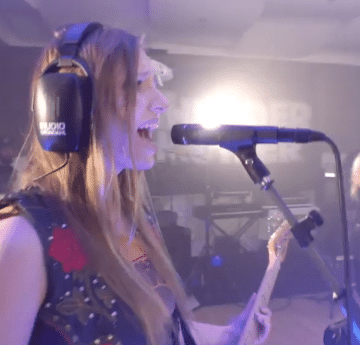 Since then, Thundermother have continued playing concerts across Europe during their Heat Wave Tour 2021 but with DeMona (Mona Lindgren) filling in on bass. Thundermother have now announced that they have parted ways with bassist Majsan Lindberg who played on the albums Heat Wave (2020) and Heat Wave Deluxe Edition (2021). Heat Wave finished at #1 on the Sleaze Roxx’s Top Ten Albums of 2020 and #6 on the Sleaze Roxx Readers’ Top 20 Albums of 2020.

After two years and one album we have now together with Majsan decided to go our separate ways. She has done an incredible job and really made a mark in the TM history, and for that we are forever grateful. We wish her nothing but the best in her future projects. Love Emlee, Filippa och Guernica

Personally from Majsan: ”I wish to see a Thundermother world domination and I can’t wait to get a ticket and see them from a crowd position. All my love to the girls!””