Thundermother release video for new single “The Road Is Ours”

Swedish rockers Thundermother consisting of guitarist and band founder Filippa Nässil, lead vocalist Guernica Mancini, drummer Emlee Johansson and bassist Majsan Lindberg have released a video for their new single “The Road Is Ours” from their upcoming double album titled Heat Wave Deluxe Edition, which will be available via AFM Records on May 21, 2021. 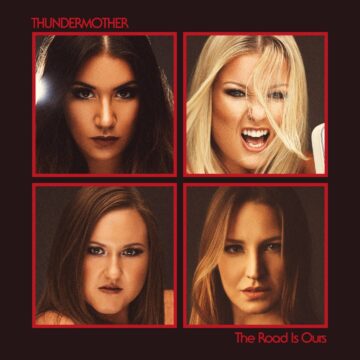 Thundermother‘s fourth studio album Heat Wave finished at #1 on the Sleaze Roxx’s Top Ten Albums of 2020 to which Sleaze Roxx stated: “I still remember when the announcement came back in late January 2017 that Thundermother were taking a break to “reconsider where the band is heading.” That didn’t sound promising. At that time, the Swedish rockers had two solid full-length albums — Rock ‘N’ Roll Disaster (2014) and Road Fever (2015) — under their belt. By late March 2017, it was announced that four members of the band had left leaving lead guitarist Filippa Nässil as the lone woman standing.

About three weeks later, Nässil had already assembled a formidable new line-up with powerhouse lead vocalist Guernica Mancini, drummer Emlee Johansson and bassist Sara Pettersson. The group’s self-titled third studio album ended up finishing at #6 on the Sleaze Roxx’s Top Ten Albums of 2018. Apparently, that was just the tip of the iceberg as this year’s record Heat Wave (with new bassist Majsan Lindberg) is one rock and rolling affair filled with some really memorable tracks including “Driving In Style”, “Into The Mud” and “Free Ourselves.” Unlike other bands in the second half of 2020, Thundermother have been able to do some limited touring in support of their stellar album Heat Wave mainly throughout Germany but with some social distancing restrictions. The sky is the limit for these female rockers who seem to get better and better with each record.”

Thundermother‘s “The Road Is Ours” video: