Swedish female rockers Thundermother have released a video for their track “Revival” from their self-titled third studio album, which was released earlier this year. 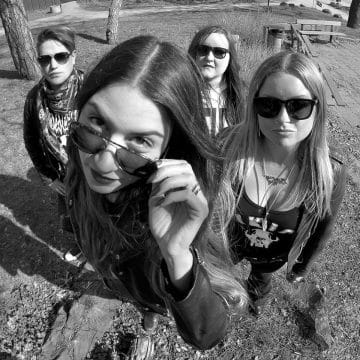 Sleaze Roxx stated the following in its review of the Thundermother album:

“Thundermother‘s track record is a strong one. This is the third really good album in a row from the Swedish female hard rockers. The band’s debut album Rock ‘N’ Roll Disaster, which was released in 2014, sounded like what AC/DC would sound like with a female frontwoman. The group’s sophomore effort Road Fever in 2015 was a slightly heavier and faster paced affair, which rocked as well. Fast forward to 2018 and not only does Thundermother have to follow up two strong records, the group has to do so with a new supporting cast surrounding band founder Nässil but also one less guitarist as the group dropped from a five piece to a four piece. Throw in that the likely most important position in the band is filled by newcomer Guernica Mancini, who had to step in for the very strong singer Clare Cunningham, and you can see why Thundermother had a lot to prove with their third studio album. All of my possible doubts were extinguished very quickly when I heard the first single “We Fight For Rock N Roll” which sounds like standard AC/DC paced fare with Mancini‘s distinctive raspy voice leading the charge.”

Sleaze Roxx concluded in its review: “Thundermother‘s self-titled album is easily one of my favorites of 2018 thus far. It’s still early but I could certainly see it finishing in the top 10 for this year.”