Clare Cunningham, the multi-talented singer for Thundermother, has released her debut self-titled four song EP via Low Medium High Records. The EP is available for purchase from LMH Records and can be heard via LMH Records‘ Soundcloud page. 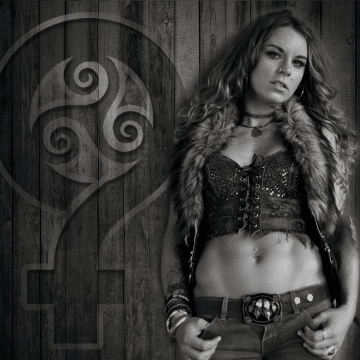 Sleaze Roxx interviewed Cunningham late last year and asked her about the dynamics within the Thundermother band to which Cunningham stated: “Yeah, well basically, Filippa [Nässil] is the centre of it all since she created Thundermother five years ago. It works really well, you know, because initially we all came in around 2013 — myself, Linda [Ström] the bass player and Tilda [Stenqvist] the drummer. Giorgia [Carteri], the other guitarist, has been in the band since almost the beginning actually — I think — so herself and Filippa have always had that nice rapport together with the guitars. And when we all joined, it was kind of like, you know, it was like “These are the songs” and it was very much kind of Filippa’s baby but we’ve grown together now as a band and we all produced the second album. It was really nice because we all got to get involved more on this one. And lyrically as well because I did not get to write anything on the first album due to the fact that it had been written so I didn’t have any input really into it but this time, I have. I think that it works really nice in that we have really good dynamics, we know each other so well musically and we are very open to each other’s new ideas. Yeah, we work really well as a team so we are looking forward even to the next record already [laughs]!”

Clare Cunningham‘s “All Out” song:

Clare Cunningham – All Out