Swedish rockers Thundermother consisting of guitarist and band founder Filippa Nässil, lead vocalist Guernica Mancini and drummer Emlee Johansson along with apparent fill in bassist Elin will be performing a virtual live stream concert from the Olympic Stadium Berlin in Berlin, Germany on May 11, 2021 at 8:00 pm CET (2:00 pm EDT). According to a Facebook posting from an individual (see below) on Thundermother‘s Facebook page earlier today, Elin is replacing bassist Majsan 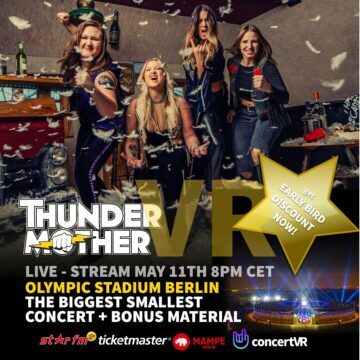 Lindberg who reportedly is unable to make it due to timing and quarantine issues. Tickets can be purchased via Germany’s Ticketmaster website.

Sleaze Roxx stated the following in its review of Thundermother‘s first live stream concert since the advent of the Covid pandemic which occurred from Studio Gröndahl in Stockholm, Sweden on April 24, 2020:

“The live stream concert really seemed to pick up when Thundermother launched into their amazing song “Revival.” Towards the end of the song, Mancini noted that this was when she would get audience participation to sing the song but this time around, she would be relying on her bandmates. Mancini‘s mannerisms throughout the broadcast really reminded me a lot of Diemonds lead vocalist Priya Panda. Mancini’s voice is to die for and I believe that Nässil mentioned during the “question and answer” session (after the main set) that she thought that the singer’s voice was better than the ones from Sebastian Bach and Ronnie James Dio. While I am not sure that I would go that far, there is no question that Mancini is one of the top female lead vocalists out there. Nässil seemed to get a few extended solos on a couple of songs such as “Hellevator” and I am still in wonder of how Thundermother went from two guitarists to one (Nässil) after the band line-up went through a major overhaul prior to the third self-titled album.

I don’t remember seeing that much of Johansson but she did make a positive impression on me when she played one of Nässil‘s guitars during the “question and answer” session (after the main set) and played a good chunk of an Iron Maiden song (I believe it was “Be Quick Or Be Dead” if I recall correctly). What struck me about new bassist Majsan Lindberg was her killer smile throughout the show and her story of how she almost passed out due to the heat at Thundermother‘s first show opening for Rose Tattoo earlier this year. I really enjoyed all of the songs played by Thundermother and even their one and only ballad “Fire In The Rain.” It was fun getting to hear Mancini sing some of the Clare Cunningham era Thundermother songs such as the Mötorhead influenced “Deal With The Devil” and the Thundermother “classic” (as per Nässil) “Shoot To Kill.” As expected, Mancini seemingly sang those songs with ease and made them hers. Not surprisingly, the setlist was heavy on Thundermother‘s last self-titled album with six tracks played from that record, two from the debut Rock ‘N’ Roll Disaster, three from their sophomore album Road Fever, one unreleased song (“Hellevator”) and two new songs (“Rock N’ Roll Heaven” and “Driving In Style”).”