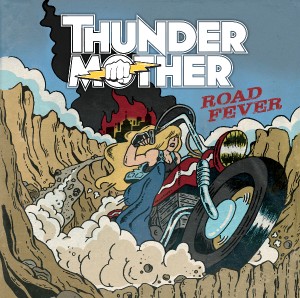 Road Fever, the sophomore effort from Thundermother, will hit the streets on September 4, 2015 through Despotz Records. The follow up to the critically acclaimed Rock N’ Roll Disaster sees the outfit treading familiar waters with their tried and true classic influenced hard rock. Frontwoman Clare Cunningman says, “We stuck with a sound that we all love and know will work as we have gained so many fans worldwide with this winning formula. But we hope to reach out now to a wider audience as our sound drifts towards the classic Motorhead era.” Guitarist Filippa Nassil adds pointedly, “If you like 70’s rock you will appreciate what we do — I guarantee you won’t be disappointed. Rock and roll is not dead.”

Thundermother was formed in 2010 when guitarists, Filippa Nassil and Italian born Giorgia Carteri, met with the same goals and passions — to put together and play in the ultimate rock and roll band. Several meetings and a few lineup changes later, the duo hooked up with three others that share that same vision in the form of Irish singer Clare Cunningham, bassist Linda Strom and drummer Tilda Stenqvist.

The band’s debut album Rock N’ Roll Disaster in 2014 hit the Swedish national charts at #2. “I remember getting the call!” exclaims Cunningham. “It was a moment none of us will ever forget. To be received so warmly on our first record was an incredible feeling and showed that this was the beginning of something big for us.”

With Road Fever, Thundermother hit back even harder than before with tracks such as “Deal With the Devil” (the album’s second single and the band’s tribute to Lemmy), “Thunder Machine” and the album’s first single “It’s Just a Tease”. “We’re female, proud of playing rock and roll and being sexy at the same time,” laughs Nassil.

The quintet headed into the studio this past May to finalize work on Road Fever after having completed five songs in Lemon Recording Studio in Klippan (South Sweden) with Martin Ekelund. This final batch of songs were recorded at Cobra Studios in Stockholm with main engineer Martin Ehrencrona and with the band’s guitarist and founder Filippa Nässil at the helm.