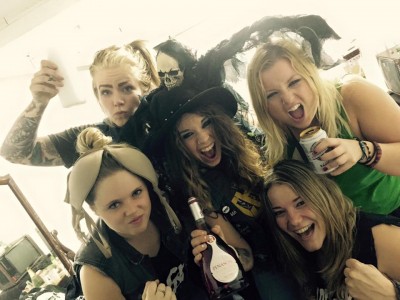 “The third single pulled from the band’s Road Fever album, one might say “Rock N’ Roll Sisterhood” is the band’s anthem. Lyrics such as, “Can’t be misunderstood, we are the rock n roll sisterhood” and the call to arms demands of ” … join the family” and “… sisters stick together” drive the hook laden track.

“This song in particular draws on our personal struggle being females in the industry but also more importantly about the unity of the band and sisters of rock across the globe,” says frontwoman Clare Cunningham. “In an industry heavily dominated by males, we will not be defeated and will continue doing what we love. and we hope you all love it too!”

With lyrics written by all five members, it’s a personal favourite of the band and they hope to inspire females all across the globe to “stick together” in whatever capacity their lives may lead them towards.”

Sleaze Roxx interviewed Thundermother‘s lead vocalist Clare Cunningham back in October 2015 who provided the following comments regarding the song “Rock N Roll Sisterhood”: “That’s kind of our empowerment song for our ladies. Of course, because as five females, we do deal with a lot of different — more in countries other than Sweden — Sweden has a very high equality rate here so it’s not so bad but you know, there are certain people that don’t like ladies in rock and roll and we are not really accepted for that. So we kind of wanted to release something that showed that we are a sisterhood, that we stick together making rock and roll, and that was definitely intentional. I don’t think that any of it is worked towards the empowerment of women but we are always trying to get it out there and just inform the fans.” Cunningham also stated to Sleaze Roxx that: “As far as videos are concerned, we’ll probably do a video for “Rock N Roll Sisterhood” rather than “Deal With The Devil” because I think that will be our next single and I think, for us, it would be a lot more fun and easier to actually do a video for that rather than “Deal With The Devil.” And it gives us a little more time because right now, we haven’t got any [laughs]. But I think that right now, the plan is to do another video and right now, it will be “Rock N Roll Sisterhood” I would guess.”