For the occasion, Nässil was asked whether Thundermother‘s new song “We Fight For Rock N’ Roll” was a return to the group’s sound on the debut album Rock’N’Roll Disaster and a departure from Road Fever? Nässil replied: “Back to the the basics. That’s where our heart is and what we love. Road Fever was awesome and we will for sure keep doing up up-tempo tunes. Now we are fever members in the band and that makes it so much easier to play tight and groovy and it allows us to individually shine. We’ve returned to the basics and now we look forward to develop our own sound and putting our own stamp on the music. Thundermother 2.0.” 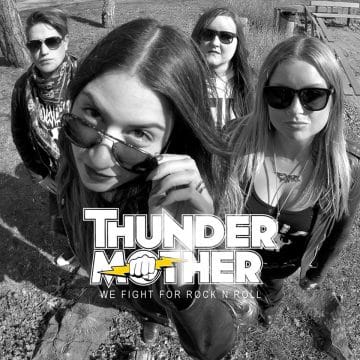 In terms of going with one guitarist rather than two in the prior Thundermother line-up, Nässil explained: “It’s way more simple and we wanna keep it that way. And if I ever miss a second guitar I’ll use a loop pedal [laughs].”

Back in January 2017, the band announced that it was taking some time to reconsider where it was heading. By the end of March 2017, it was decided that everyone but Nässil was leaving Thundermother with guitarist Giorgia Carteri making some choice words presumably in the lead guitarist’s direction. Nässil stated the following with respect to how long trouble had been brewing with the previous line-up and what were the issues: “We hit a rough patch last year and I had high hopes that we could continue playing together. But as you all know, my former members decided to end it and I wasn’t ready too. As for me, I feel like we grew apart and I respect their choice to move on and I’m always gonna look back on each and everyone of them with fond memories. And I feel truly blessed and happy that I can continue and that I found new members that wanna go on this crazy ride with me.

In terms of how the new line-up differs from the previous one, Nässil simply stated: “Come to the shows and check us out.”