Tierrax’s video for track “On My Way”

German rockers Tierrax released a video for their song “On My Way” back in December 2016.

The group’s “History” on its website states (translated from German to English via Google with slight edits): 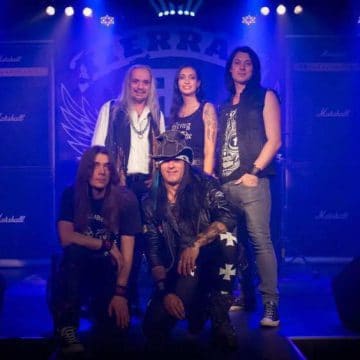 “Tierrax was founded in the beginning of 2012 by bassist Fönzu. Together with his former Dust & Bones members, Fönzu recorded the demo CD “In The Streets“. Musical differences were soon apparent, and Fönzu looked around for new band members.

In the summer of 2012, Fönzu teamed up with drummer Pete (ex-Messiah/ex-Amon). After several changes of the band, the guitarist Olivia and guitarist Stone were able to find the perfect line-up in the autumn of 2013, which has been strengthened since November 14th by the guitarist Silas.

In the spring of 2015, Tierrax recorded their first album at the Dust-Recording Studio.

The music of Tierrax is a musical cocktail of sleaze metal with hard rock elements that connects with Olivia‘s unique voice. Also at the live concerts, the band and their audience obviously have a lot of fun. Party and rock n roll is the motto of the band.”

Tierrax‘s “On My Way” video: