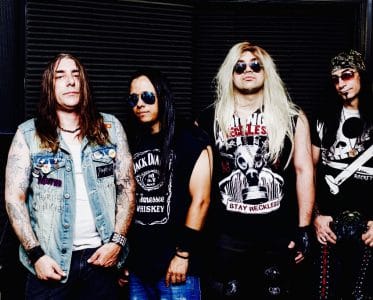 “Retrospect Records has signed the band. It’s great to be on the team. The record will be out quite soon. It’s great to be label mates with Wildstreet and all the other bands. Sam McCaslin, the President of the label, has been great to us. We really feel appreciated and it’s nice not having to deal with egos and pressure as we had to before with other labels. We feel at home and did the best we could to give them and the public the best record possible. There are some rockers and a few ballads as well.”

Speaking exclusively to Sleaze Roxx, Tiger Claws guitarist Dennis D spoke about his background as he stated: “[Retrospect Records president] Sam gave me full artist control, which none other did. He is a fine musician in his own right and I couldn’t be happier. I would have liked to have had more time to throw into it but we have day jobs, families, etc. It’s just not the same as we once did. Rent must get paid [laughs]. I was a soundman in New York City for 27 years. I worked clubs such as The Limelight, The Roxy, Sundance, The Voodoo Lounge, Red Zone… so I had an opportunity to do live front house sound for everyone who came thru from Gilby Clarke, C.C. Deville, Guns N’ Roses, etc, etc…  I did ’em all.

I’m really just a guitarist. I worked for Lil Kim, P. Diddy, Notorious B.I.G., Adam Pascal, Mina Caputo… I even played with Mayhem from Norway, Ati, the singer, and I recorded several songs together and were offered a deal. I’m just an honest guitar player. I’ve been doing it since 1989. I’ve been playing all my life. My father, grandfather and great grandfather were all charter members of the musicians union here in NY 802 since the 1940s. I have played many genres. Honestly, I just keep my mouth shut n’ play the best I can. I’m really just a Randy Rhoads, Eddie Van Halen fan. Tiger Claws is my own and it’s great to finally have the chance to do that. I feel lucky. There’s tons of bands and not many have labels. I just always keep working no matter what and do the best job I can.”