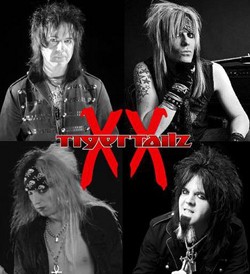 More than two decades after the release of ‘Bezerk’ — an album that defined the whole turn-of-the-decade glam metal zeitgeist — Tigertailz roll on with a new five-track EP entitled ‘Knives’. Due for release in October through Scarlet Records, ‘Knives’ represents the first new music from Tigertailz in almost six years.

“Just wanted to post a quick note to say the new Knives record is now completely finished,” states guitarist Jay Pepper. “Yep, all tracks now mixed, mastered, with artwork completed and all sent to the record company for release during 2nd week of October. We’re all absolutely delighted… And you know what, this new material really does sound feckin awesome! We’re all blown away by how good this record has turned out. It’s proper old school Tailz — big riffs, big hooks and even bigger choruses. So if you liked Y&C and Bezerk you’ll totally love this new record.”

And you know what, this new material really does sound feckin awesome..!! We’re all blown away by how good this record has turned out.. It’s proper old school Tailz — big riffs, big hooks and even bigger choruses! So if you liked Young And Crazy and Bezerk you’ll totally love this new record. Many thanks to everyone who’s helped pull it together. It totally ROCKS.!!!

Founder member Jay Pepper has reunited with long-time drummer Matt Blakout to create ‘Knives’, along with singer Jules Millis and bassist Rob Wylde. Matt, who has recently played with Mott The Hoople star Verden Allen, returns to the band at a pivotal moment in its history. A time when it sounds hungrier than ever, and when the ‘Knives’ are most definitely sharpened.

“The new video for Shoe Collector will be out in the next 3-4 weeks, continued Pepper, “AND — we’re going to run a competition to win one of my Custom Kramer guitars! Oh yes folks, you can win the real ‘Tailz Bastard’ Kramer guitar worth over £1,000… Details coming soon.”

The road rolls on for a hungry, revitalised Tigertailz. From a band that has survived challenges so bizarre that most wouldn’t even believe it, expect blow-your-mind live performances, and in ‘Knives’ some new generation Tigertailz music to rally the clans. In fact, a competition to win a signed copy of the new EP attracted over 10,000 ‘hits’ in less than three hours! It’s a resurgence to make fans young and old proud of this classic Welsh metal band. The best advice right now is to brace yourselves…