Glam rockers Tigertailz have released a video for their version of the Mud classic “Dynamite” to officially launch their new Blast album release today.

Sleaze Roxx stated the following in its review of Tigertailz‘s last full-length studio album Thrill Pistol: ” If you have seen pictures of Tigertailz over the years you would automatically expect them to play radio-friendly rock like that of Poison. While the band is capable of such a sound, they don’t limit themselves to it – and on this release there is often an unexpected sinister sound lurking underneath as Tigertailz takes you on an unpredictable journey.” Sleaze Roxx concluded its review by stating: “Thrill Pistol is a great album – pure and simple.”

Tigertailz‘s Thrill Pistol went on to finish as the #6 album on Sleaze Roxx’s Top Ten Albums of 2007. 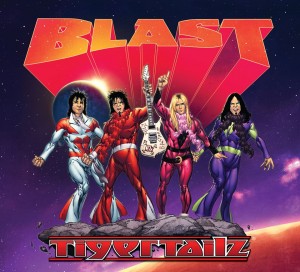