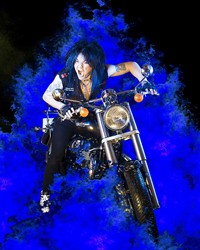 Two months after parting ways with bassist Sarah Firebrand, UK glam rockers Tigertailz have also split with long-time frontman Kim Hooker. The band is now beginning the search for his replacement, and those interested in the gig are being asked to send their information to management@tigertailz.co.uk.

In a statement the remaining original members of Tigertailz, guitarist Jay Pepper and drummer Ace Finchum, said, “Relieved to be honest. We’re obviously disappointed that Kim’s gone but things have deteriorated to such a point that the band looked like it would never play or record again. So something had to give. And we’d just reached a point where we couldn’t agree on anything anymore — and one of the biggest issues being Sarah’s departure. Since then things have just gone from bad to worse and we’ve all had enough, so time to move on.

But this isn’t life or death. This is just a band trying to have some fun making music and playing some great Live shows. So if anyone out there thinks they have the right credentials to be the new Tigertailz frontman then we’d love to hear from you. Let’s hope this isn’t the end of the ‘Tailz journey and we see you all soon. Keep the faith.”

Kim Hooker replaced original Tigertailz vocalist Steevi Jaimz prior to the release of ‘Bezerk’ in 1990. The Hooker fronted Tigertailz went on to release such albums as ‘Banzai!’, ‘Wazbones’, ‘Bezerk 2.0’ and their last studio album, 2007’s ‘Thrill Pistol’. That album contained the final works of bassist Pepsi Tate, who died of pancreatic cancer on September 18, 2007.