UK glam rockers Tigertailz have announced that they will be unable to attend the Rock N Skull 2016 edition to make their scheduled performance on Sunday, October 30, 2016 due to their lead singer Rob Wylde having some visa issues and not being able to get into the United States of America. This would have reportedly been Tigertailz‘s only US date this year.

“Tigertailz are extremely sad to announce that due to US Customs and Border Protection we will not be able to play the Rock n Skull festival this coming weekend.

Visas for all band members were approved and issued. However, upon arrival at London Heathrow airport a band member was denied access to the US due to their visa being revoked. 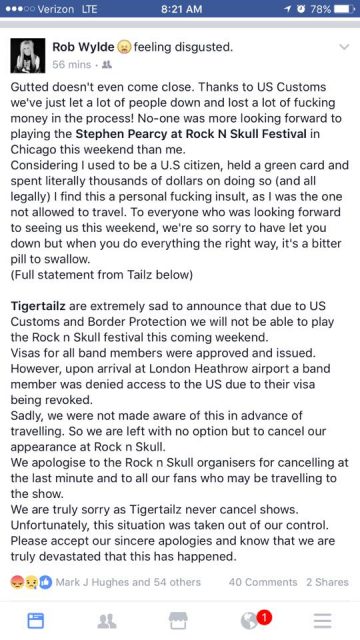 Sadly, we were not made aware of this in advance of travelling. So we are left with no option but to cancel our appearance at Rock n Skull.

We apologise to the Rock n Skull organisers for cancelling at the last minute and to all our fans who may be travelling to the show.

We are truly sorry as Tigertailz never cancel shows. Unfortunately, this situation was taken out of our control.

Rock N Skull organizer also posted a Facebook message from Wylde where the latter provides more details on the situation.

Murr has acted quickly as he has just announced in record time a replacement for Tigertailz as he subsequently posted the following Facebook message: “I apologize about a TigerTailz but sitting at breakfast (Jim Glass, Gavin Glass, and Terry Swoik are done here) I have booked TigerTailz replacement !!!!”

Sleaze Roxx stated the following in its review of Tigertailz‘s latest studio album Blast: “All in all, despite my own personal concerns, I feel this is a good follow-up and continuation of the Tigertailz name and I feel the band created a decent musical endeavor that is grabbing a touch from the musical past, a bit of their own past, which they have molded to create a modern good time record that all music fans can raise their hands in salute and have a “Blast” to (sorry, I couldn’t resist). I think Pepsi would be proud.”