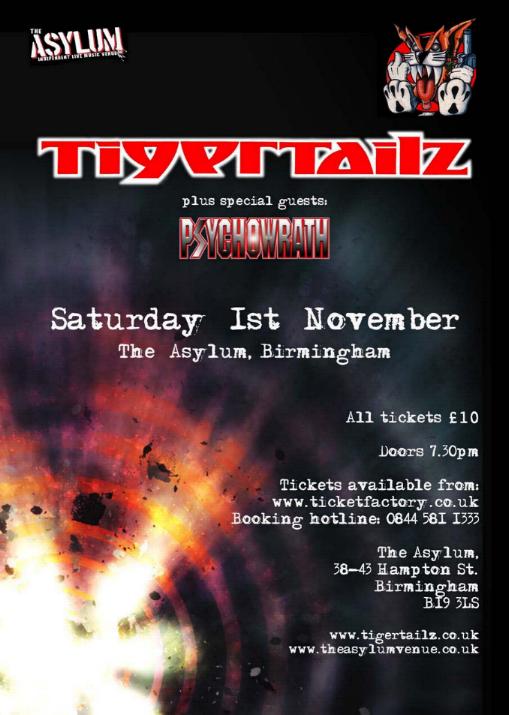 TIGERTAILZ have confirmed they will record their forthcoming Live show at The ASYLUM in BIRMINGHAM on Saturday November 1st 2008.

The Live album will be a ‘pure Bootleg experience’ recorded with and for Tailz fans and will only be available to buy from the official TIGERTAILZ Web site (www.tigertailz.co.uk).

The band quote “Tailz fans have been asking for another Live album for years but we didn’t like the idea of producing something that didn’t sound real or capture what a Tailz Live show is all about. So, after discussion we’ve decided to record the ASYLUM show on November 1st 2008 and release it directly via our Web site. The product will be recorded straight off the desk so it should sound rough and exciting – just the way we like it. We would ask all you Tailz Maniacs to get to the ASYLUM show and make as much noise as you possibly can. It’s your chance to be part of an actual TAILZ album, if you shout loud enough you’ll be on the record”.

There will be no record company involvement for this Live album release, it’ll have basic raw artwork so the price can be kept to a minimum. The band hope to release the album as soon as possible after the show.

“This will be a dirty, loud, rough, raw and sweaty Live experience – a bit like the ‘Rock Goes To College’ shows that used to be recorded back in the 70’s. We’re going to play some songs we haven’t played for many years so a real treat for the pure Tailz Troopers”. Definitely not to be missed…