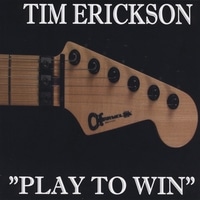 Tim Erickson is the rare kind of musician that sticks to his guns, and won’t give in to trends he doesn’t believe in, “I won’t pretend to be something I’m not, just to fit in” an attitude that gained him respect, and a loyal fan base among like minded Guitar Rock enthusiast’s on his uncompromising road into that sweet and gritty Hard Rock spotlight. The evidence of this growing success can be found in Erickson’s song “The Sun and the Moon,” which charted at #11 on the Rock charts on the idolunderground.com radio network, and even more so with his new CD “Play To Win,” released in May 2008, which is being called his best work to date. The maturation and infectious buzz of Tim’s music is earning him some big credentials and promises more to come.

Knowledge of Tim’s musical background is essential for understanding the intensifying hype surrounding him: Born in Southern California into a musical family, Erickson bought himself a used drum set when he was only 13 with the money he earned mowing lawns around his neighborhood. At age 15, Tim’s musician stepfather bought him his first guitar after playing him Van Halen’s first album, where the fiery insanity of Eddie’s iconic “Eruption” changed Erickson’s life forever. “When I heard Eddie play “Eruption,” says Erickson, “I was mind blown!!!” I said to myself, “That is the coolest thing on the planet!” and knew I had to learn to play guitar like that. “Once I got a guitar, and started learning how to play, it came to me more naturally than anything I had ever done.” Throughout his teens and early twenties, he played in several bands leading up to “The Smoking Section” formed with his younger brother Sean on lead vocals, bassist Scott Ferguson, and drummer James Maddox. After playing a few shows together, the quartet recorded their self-titled debut, completed in just three days. Receiving regular radio play, and building a reputation for their electrifying high-energy live shows, the band was on the verge of success when personal issues cut short their momentum, and ended the band.

Erickson’s truncated musical momentum didn’t dishearten his musical aspirations, however, and in fact it only further crystallized his focus and desire to reach greater heights. This sentiment is evident in his new solo album “Play to Win” where Tim’s sound pulsates with a rock authenticity, and authority he describes as his own unique “vibe.” “I think the thing that sets me apart from a lot of other guys is that I put a lot more into the vibe of the song. I love songs that make you feel something, and that have a really deep visual vibe, not just a ton of technique. It’s all about balance for me. I like stuff that is technical too, but it’s no good to me without vibe.” Adding to that vibe is former VLS (Vamp Le Stat) lead singer Jimmy Tuttle, who is teaming up with Erickson to form their new band, which is currently in the song writing phase, and working on some truly inspired material for an upcoming album that is already creating amplifying ripples of excitement. “I love the sound we have, it’s a really cool blend of styles. I would say that much like my new solo album, we are somewhere between Stone Temple Pilots, Guns N’ Roses, Alice In Chains, and the heavier side of Nickelback, mixed with a little bit of early 80’s influence in the guitar solo department that guys like George Lynch, Eddie Van Halen, Randy Rhoads, Warren DeMartini, and a few years later Slash were doing. It’s a very unique sound that has a very current sensibility, but with a little more color, and fire. The first single off new my solo album is called “Livin’ Ain’t Easy” and is a great example of that blend. So far the reaction to it has been incredible!!! The most common remark I’ve been hearing from people after hearing the new stuff is that the mix of the old school meets new school really creates a new style that a lot of people have been looking for. We’re using that song, and a few others from my solo album, along with some great new stuff Jimmy and I have been working on, as our starting point. We have great chemistry as a singer & guitar player team, as well as being a killer guitar duo. Jimmy’s a real deal talent as a singer, and a guitar player, so when you put the two of us together in the same band the results are nothing short of amazing. I’m really excited about the future of this band, and expect big things.”

Check out upcoming show information and music from Tim Erickson on his websites: www.myspace.com/timerickson, www.theneonsky.com, www.broadjam.com/NEONSKY, www.taxi.com/timerickson. Music from “The Smoking Section,” and his first solo release “The Ride,” are available at www.theneonsky.com and his current solo album “Play To Win,” is available through iTunes, CD Baby, Digstation, and several other major on-line retailers, as well as being available on the iPhone, and Verizon Network for downloads, ring tones, and ring back tones. Watch for the yet untitled upcoming release with new band later this year with updates on www.myspace.com/timerickson and www.theneonsky.com news.