Brandee Gaines, the new wife of Stryper bassist Timothy Gaines, has indicated via Facebook today that her new husband will not be playing on Stryper‘s upcoming new studio album. 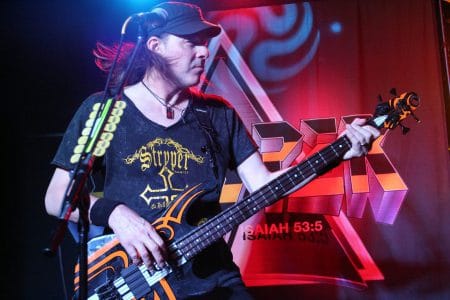 Whether Tim Gaines would be a part of Stryper‘s upcoming studio album has been up in the air for some time and even publicly back to December 2016 when Stryper frontman Michael Sweet revealed in an interview with Nick from WSOU about the possibility of doing the album without Gaines (as transcribed by Sleaze Roxx): “Well, I mean, it remains to be seen but it’s very possible. I’d go as far as to say even probable. But we don’t really know quite yet. It’s something that very well could happen. Absolutely.” The next day, Gaines advised via Twitter that he was not leaving Stryper. 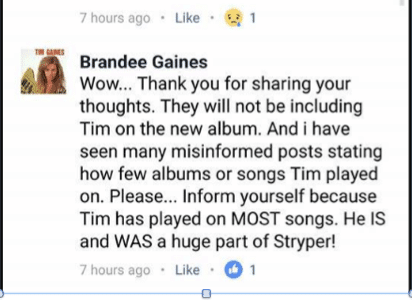 Wikipedia reports that Gaines likely did not play on Stryper‘s To Hell With The Devil (1986) and did not play on the subsequent In God We Trust album (1988) as it is indicated in part (with slight edits):

“Being a Sunset Strip regular, Gaines joined up with Michael Sweet, Robert Sweet and Oz Fox in 1983 who had already formed Roxx Regime, which would be later changed to Stryper. Gaines quickly rounded out the quartet’s sound with his bass, background vocals and keyboard skills. Gaines recorded the band’s debut EP The Yellow and Black Attack and their follow up full-length album Soldiers Under Command in 1985.

Gaines briefly left the band during the pre-production period of the band’s platinum selling album To Hell With The Devil but rejoined the band after the sessions were concluded in order to tour. Gaines did not play on the band’s follow up In God We Trust but did tour in support of the album.

Gaines‘ contributions to the band’s next release Against The Law were evident in his playing on the release but he did not play on the band’s cover of Earth, Wind & Fire‘s “Shining Star” (the track was recorded by Randy Jackson).”