“Yep Great to see my time in JP has erased and my CDs and ME from their past!!!!! Well I haven’t forgot my past and I will be working on re recording the studio CDs and releasing them myself!! Why not?
Tim Ripper Owens“

Wikipedia states the following about Judas Priest‘s Ripper years (with slight edits): “After the Painkiller Tour in 1991, Halford left Judas Priest. In September 1991, there were indications of internal tensions within the band. Halford went on to form a street-style thrash metal group named Fight, with Scott Travis on drums for the recording sessions. He formed this band to explore new musical territory, but due to contractual obligations, he remained with Judas Priest until May 1992.

Halford collaborated with Judas Priest in the release of a compilation album entitled Metal Works ’73–’93 to commemorate their 20th anniversary. He also appeared in a video by the same title, documenting their history, in which his departure from the band was officially announced later that year.

In a February 1998 interview on MTV, Halford came out as gay.

Tim “Ripper” Owens, who had previously sung in a Judas Priest tribute band called British Steel, was hired in 1996 as Judas Priest‘s new singer. This line-up released two albums, Jugulator (1997) and Demolition (2001), as well as two live double-albums – ’98 Live Meltdown and Live in London (2003), the latter of which had a live DVD counterpart. Although Jugulator sold relatively well, it was given mixed reviews.” 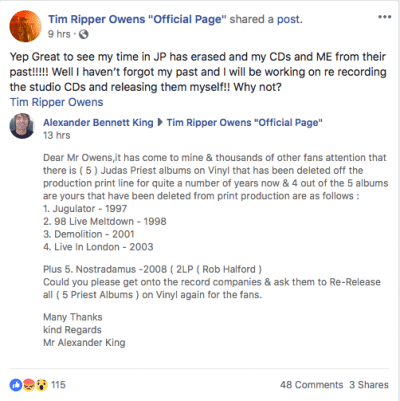