Tim “Ripper” Owens reveals touring plans for K.K.’s Priest are to tour non stop for a year or two

K.K.’s Priest‘s lead vocalist Tim “Ripper” Owens was recently interviewed by Jimmy Kay and Alan Dixon for Canada’s The Metal Voice. Owens was promoting his new solo EP Return To Death Row, which was released earlier this month (on December 9, 2022). 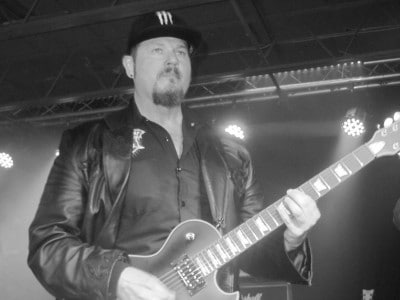 In terms of his new EP, Owens indicated (as provided by The Metal Voice with slight edits): “Jamey Jasta did those Dee Snider records and I said those  are fantastic. Those Dee Snider records were so good. I love Dee. I loved Twisted Sister in the ’80s. So I did his podcast [Jamey Jasta] probably to promote the KK’s Priest record and he said ‘OK, 25 year of Jugulator is coming up’ and he started sending me ideas. This record is great and it came together so fast. Like vocally, I just sang these songs and flew through it. It’s heavy but it’s still melodic. I think with this EP, we wanted to come out of the gate pretty brutal.”

With respect to how close KK’s Priest are to completing their follow up to their debut album Sermons of The Sinner, Owens stated: “It’s really close now. It’s in the mixing process I think, producing and moving some stuff around. I actually really like it. It’s next level from the last one [Sermons of The Sinner]. I think the last one was the perfect record. This next one though, I think it’s that and beyond. I think vocally, it’s a little heavier. It’s got tons of highs still but it’s got edgier vocals. It’s got some melodic beautiful vocals but it’s just edgier I think. I enjoyed doing this one a lot.”

When asked about KK’s Priest‘s touring plans, Owens revealed: “Next year is going to be pretty swamped cause KK’s Priest is now finally going to put this record out and tour. The plan is just to tour non stop for a year or two. The plan is to hit the road, I don’t think [K.K. Downing] wants to do just festivals. Hopefully it all comes together.”

You can listen to the interview with Tim “Ripper” Owens below: