A new band is on the horizon as former Judas Priest and current Dio Disciples lead vocalist Tim “Ripper” Owens has teamed up with 51 year old Cage and Warrior frontman Sean “The Hell Destroyer” Peck and 56 year old Jag Panzer singer Harry “The Tyrant” Conklin to form The Three Tremors. 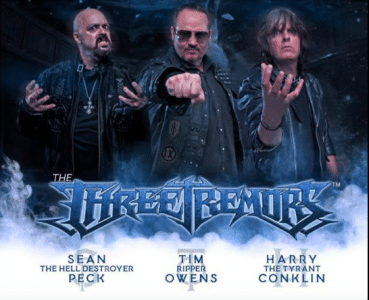 The group describes itself as follows on its Facebook page:

“Three of Earth’s mightiest voices harnessed as one. Three times the power, achieving what one voice cannot. Three Men who have committed their lives to heavy metal. The Three Tremors…

“They said it could not be done. They said it would never happen but it is here! The Three Tremors featuring Tim “The Ripper” Owens from Judas Priest, Iced Earth and many others, Harry “The Tyrant” Conklin from underground legends Jag Panzer, and Sean “The Hell Destroyer” Peck from Cage, Death Dealer and Denner/Shermann. Take a journey on this ground breaking and neck breaking thrill ride and be a part of this apocalyptic speed metal bullet train. Here is your chance to support this 12 song heavy metal history maker and get in on all of the incredible product that goes along with this metal masterpiece of an album. This is a BAND not just a Project that is here today and gone tomorrow. A European tour is booked and the band will be performing live all across the world.

Never before has this much firepower been assembled on one stage. This is not just some wild claim because once you hear the first song and see this live you will understand why even the legends of old that conceived this urban legend, failed to execute their plan. well we have and this 2018 version of the Three Tremors will leave no doubt that we harnessed this raw power and focused it into an amazing album filled with all time classic heavy metal songs. The booklet and cover art are second to none and provide the visual wow factor to go along with the music. The cover art is done by Marc Sasso of Halford, Dio, Adrenaline Mob fame. His incredible cover art has captured the feel of this album perfectly. Here you can find everything you could imagine to play, wear, show your support and collect regarding this historic achievement in heavy metal. So jump in with both feet without hesitation this is a BUY OR DIE situation for a true fans of heavy metal!!!”