Sleaze Roxx as well as many other websites have recently reported the sad news that Stryper guitarist Oz Fox fell down due to an undisclosed medical condition at a Sin City Sinners‘ show at Harrah’s Las Vegas in Las Vegas, Nevada, USA on Saturday, 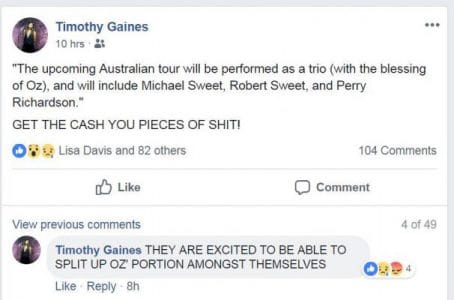 August 11, 2018. Stryper later clarified that Fox suffered a seizure and was instructed not to drive or fly for the next 90 days. Rather than cancel their upcoming four date Australian tour from August 17 to 21, 2018 which would have surely left many fans disappointed, Stryper announced that they would honour those four tour dates and perform as a trio without Fox.

Instead of sending wishes and prayers to an ailing former bandmate, it appears and as reported by Metal Sludge that former Stryper bassist Timothy Gaines has accused the Stryper band members (minus Oz Fox) of simply wanting to split the money that would have been intended for Fox at the Australian tour.

The following comments were apparently posted yesterday on one of Gaines‘ Facebook pages as reported by Metal Sludge:

“GET THE CASH YOU PIECES OF SHIT” and “THEY ARE EXCITED TO BE ABLE TO SPLIT UP OZ’ PORTION AMONGST THEMSELVES.”