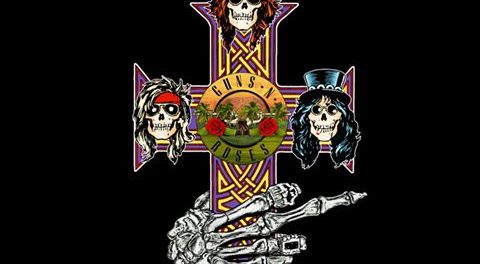 To whom is Guns N’ Roses’ not so subtle message aimed at? 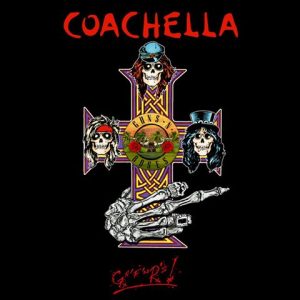 With Guns N’ Roses poised to play a second time tonight at this year’s Coachella Music & Arts Festival in Indio, Calif., a poster has been posted on the group’s Facebook page which suggests a “fuck you” message to either their former members, Izzy Stradlin (guitar) and Steven Adler (drummer); anyone who is not happy with the current “reunited” version of Guns N’ Roses featuring singer Axl Rose, guitarist Slash and bassist Duff McKagan; or, towards some other group.

Given that Adler was reportedly practicing with Guns N’ Roses prior to the band embarking on their surprise warm-up gig at the Troubadour on April 1, 2016, it appears unlikely that the message on the poster is aimed at either Adler and/or Stradlin.

While the world continues to wait to see if Guns N’ Roses will at one point share the same stage with Stradlin and Adler, Guns N’ Roses‘ current tour has to be considered a resounding success so far.

Despite Rose being physically constrained to a chair for the debut of the group’s ‘Not In This Lifetime’ tour due to a fractured bone in his left foot requiring surgery shortly after the group’s surprise warm-up gig at the Troubadour on April 1, 2016, the rest of the shows have been proceeding to mostly strong reviews and a lot of media coverage. Guns N’ Roses have also brought in some surprise performers including ex-Skid Row singer Sebastian Bach and AC/DC guitarist Angus Young to join them on select songs at various shows.