Todd La Torre has not spoken to Queensrÿche drummer Scott Rockenfield in more than 1.5 years

It has already been revealed that Queensrÿche‘s lead vocalist Todd La Torre ended up handling all of the drum parts on the band’s upcoming new studio album The Verdict, which will be released via Century Media Records on March 1, 2019. The band status of original Queensrÿche drummer Scott Rockenfield has been a question for many of the group’s fans ever since the drummer didn’t return from his somewhat unprecedented paternity leave back in February 2017. 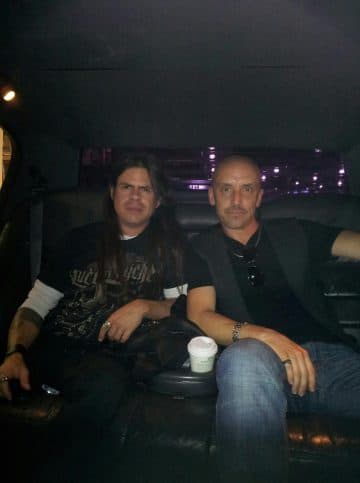 La Torre was recently interviewed by Jimmy Kay for Canada’s The Metal Voice and shed some light on Rockenfield‘s participation in Queensrÿche or lack thereof over the last few years.

La Torre advised (as transcribed by The Metal Voice with slight edits): “I’m gonna have to give you a back story. Scott had a baby in February of 2017. Everyone’s happy for him and he wanted to take paternity leave and we totally supported that. Then after about six months, we’re kind of saying, ‘Hey! How’s it going? Hope everything’s well. When do you think that you might be coming back?’ We never really got a definitive answer. So at some point, management told us that he wanted to take the rest of the year off and then it was like, ‘Okay, well what about January of 2018?’ And I was told from management that you know there was no confirmation on that yet. So Casey [Grillo] has been filling in with us the whole time, which was only supposed to be a very temporary thing. Honestly dude, I don’t know anything beyond that. I mean, I don’t talk to Scott. I haven’t talked to him in over a year and a half so I don’t know what he’s doing. I don’t know what he’s up to. I don’t know if he wants to come back or if he never wants to do it again. I have no idea and he hasn’t made any of that known to my knowledge, to any of us, and so when people ask, ‘Is he is he coming back?’ At the end, I have no idea.

We just don’t know anything and we can’t give an answer so let me get back to more of your point. So that’s kind of where it is right now. It’s also important that you know people know that I when I joined this band and we were writing songs for even the first record, some of the guys would send me some songs and I would call Scott and say, ‘Hey, you know they sent me some tunes to put drums on. Is this ok? I don’t want to step on your toes and/or anything.’ He said, ‘No, no, no. It’s totally fine. Whatever keeps the process moving forward.’ I was like, ‘Okay, cool.’ So I ended up doing a lot of drumming on demos just to keep the songwriting going and shape the songs and I did that on Condition Hüman. So fast forward to this record and Scott is basically off the grid, family mode, and he wasn’t involved in the writing process at all. So of course, I did all the drums on all these songs and when it came time to record, we were hopeful that he would at least do the record. Like, ‘Okay, you weren’t part of the writing but here’s here’s the songs and you know the door has always been open.’ But we weren’t getting confirmation about anything and so it reached a certain point where it was a few weeks before we had to enter the studio that was booked and flights were booked and there was still no confirmation. So finally you know, in a nutshell, he basically gave the band his blessing to record without him.”

You can listen to the interview with Todd La Torre by The Metal Voice below: